Behind the Markets Review – Is Dylan Jovine Legit? 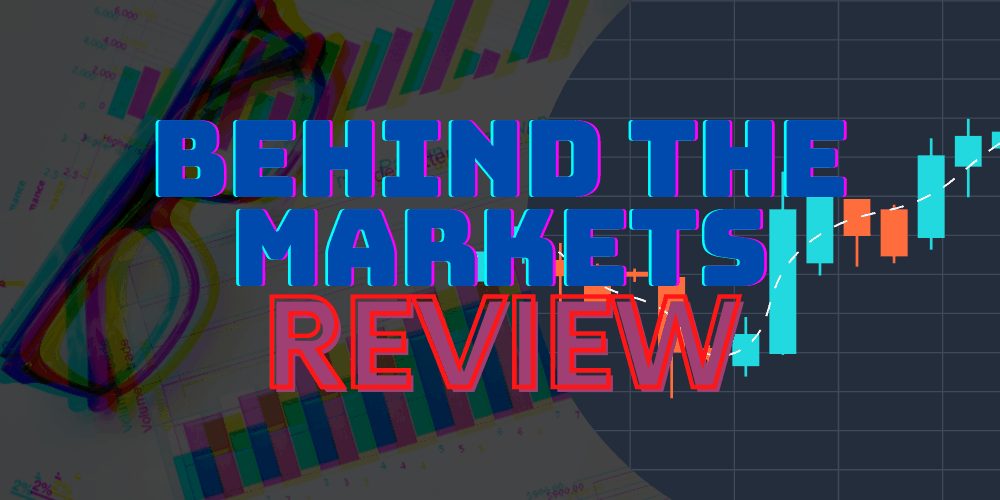 The Behind the Markets newsletter is generating quite a bit of buzz online with members, and I’m here to see if it lives up to the hype. Keep reading my Behind the Markets review for the full rundown of Dylan Jovine’s stock-picking service.

What Is Behind the Markets?

Behind the Markets is an online newsletter that provides subscribers with stock recommendations, trade alerts, and bonus reports. Dylan Jovine is the editor and lead stock picker.

This stock-picking service cues members into mid-cap companies with growth potential. It follows a conservative investing approach that seeks out long-term value.

Something that I like with Behind the Markets is that it doesn’t anchor itself down to a single sector. Jovine scours the stock market to find investment opportunities for members — wherever they may be.

A lot of newsletters have a niche, which could be great when the sector is hot. However, portfolios could also take a big hit when an industry cools down.

So some folks might appreciate the variety on offer.

There’s a lot more to this service, and I’m going to dig into the details as we go.

But first, let’s take a closer look at Behind the Market’s strategy.

Behind the Markets’ Investment Strategy

Jovine and his team look for stocks that could be trading at a significant discount to what the underlying business is worth.

The team’s business valuation approach is very comprehensive, but here are some key takeaways about Behind the Markets’ strategy. They search for companies that have:

While all of these points of analysis are valuable, the major draw is Dylan Jovine’s focus on companies that could be seeing a temporary setback. In other words, they could be undervalued at the moment, which could result in bigger returns in the future.

When Jovine spots a stock that fits this criteria, he shares his findings with Behind the Markets’ subscribers through the monthly newsletter.

>> Already sold on Behind the Markets? Sign up now << 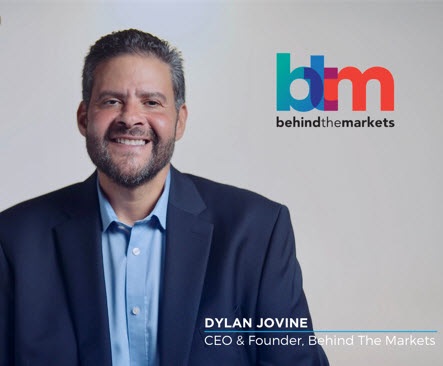 Who Is Dylan Jovine?

Dylan Jovine is an excellent stock picker, and he’s earned a great rep as a Wall Street vet who has a finger on the pulse of the market. Jovine pens insightful investing analysis that’s influenced by his extensive background as a professional investor.

He is currently the lead researcher for the Behind the Markets service, but you might know Jovine from his previous work on Tycoon Report.

Some of his most popular research reports include:

Jovine made his Wall Street debut in 1991 under the tutelage of NYC investment banking legend Peter Jaquith. This was a big break for a blue-collar kid from Queens, and he ended up making the most of it.

In 2009, he forecasted the ’09 Financial Crisis and subsequent stock market crash.

The depressed market was a fertile trading ground, and Jovine used it to reap massive rewards in dirt-cheap stocks as the market recovered. This is just one example where his stock market predictions paid off big.

So what is Dylan saying about the stock market today? Let’s take a look at his latest prediction to find out.

Dylan Jovine is legit. He has a solid track record in the world of finance and pens quality analysis.

Jovine’s reputation is much more established than your average self-proclaimed online research guru.

You don’t need to worry about credibility with Behind the Markets. Dylan Jovine is as qualified as they come.

Jovine fears that a Chinese attack on Taiwan could be imminent, and the campaign could end with outright Chinese control of one of America’s most vital supply chains.

We’ve already seen the economic impact caused by the Russia and Ukraine conflict, and Jovine believes a war between China and Taiwan could be much worse.

China already claims ownership of the self-governed island, and the government has been itching to take back the lucrative territory for decades.

Recent world events and global economic weakness resulting from the pandemic may embolden the Chinese and make the likelihood of an invasion much greater.

On their part, Taiwan and the United States appear to be preparing for the worst. Taiwan just negotiated a $1.75 billion defense contract just last year, but American policymakers have stopped short of pledging direct military support in the event a hot war breaks out.

Perhaps most worrisome is the prospect that other Pacific powers, like Japan and South Korea, could be dragged into a conflict, and potentially ignite World War III in the Pacific.

This doesn’t bode well for an already stumbling economy, but the impacts could be far more reaching. A conflict of this magnitude could seriously impact the US’ standing as a technological innovator and world power.

The United States and other countries get two-thirds of their microchips from Taiwan. A microchip contains the operating system that controls most of the world’s electronics, from computers and mobile devices to cars and hospital equipment.

A Chinese attack would effectively block the distribution of these components, reducing supply to 33% of what it once was.

Such an event would be catastrophic, causing the prices of devices we use every day to skyrocket as microchip supply chains crumble. Consequently, this would spell disaster for manufacturers, many of whom would have to lay off workers and cut production due to chip shortages.

When the Coronavirus first took root in 2020, we all got a taste of the problems supply chain shortages can cause, but the pandemic shortages could be a walk in the park compared to what’s at stake in Taiwan.

Jovine’s most recent research reports could provide shelter for portfolios as well as an opportunity for growth. It’s all available with a Behind the Markets membership. 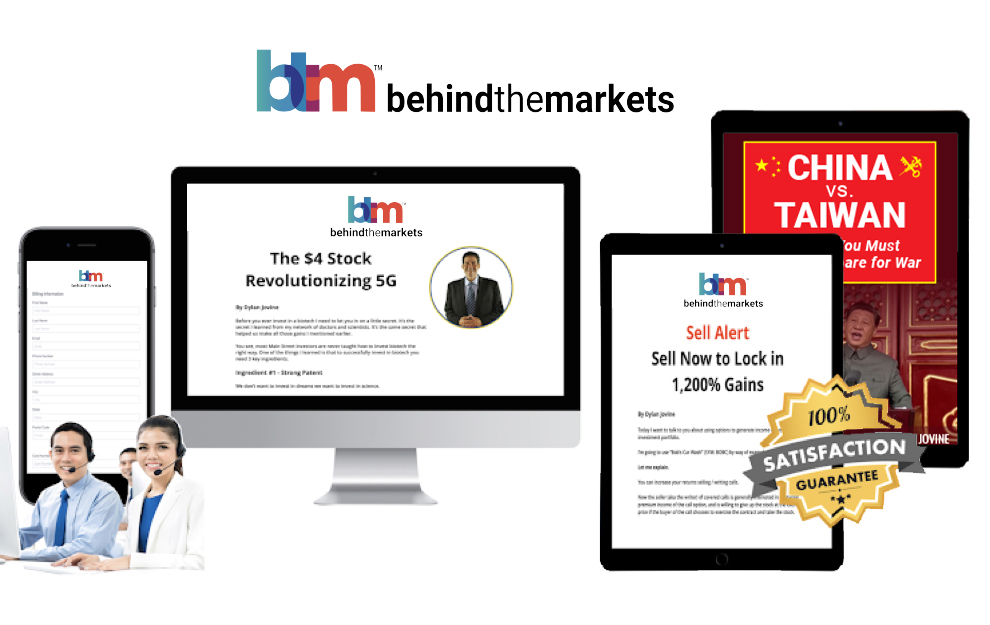 What’s Included with a Behind the Markets Membership?

Behind the Markets has a whole host of exceptional features.

Keep reading for a breakdown of each one.

The Behind the Markets newsletter seeks to discover growth opportunities that aren’t obvious winners on the stock market. You’ll receive 1-2 stock recommendations from Dylan Jovine each month, along with a detailed report on the company.

Jovine also shares sell alerts, so you can maximize profits instead of getting caught in a stock market roller coaster.

Trade alerts are a great addition to the service. They’re especially useful for anyone still getting the hang of timing trades. Folks who don’t want to spend every waking moment glued to a screen could also appreciate Jovine keeping a lookout.

China vs. Taiwan: 3 Steps You Must Take to Prepare for War

Jovine’s Prepare for War report takes a deep look at the conflict between China and Taiwan, as well as the impact a Chinese attack would have on the economy.

The guide covers the repercussions of such an event on both United States and Chinese markets and how that impact could extend to other parts of the world.

It then provides you with three stocks that could be primed to profit, as well as Jovine’s red flag list of companies to avoid in the event of a war.

Alongside Behind the Markets, Jovine is throwing in three additional reports to sweeten the pot further:

Each report offers even more investment ideas and wealth-building tips from Jovine. 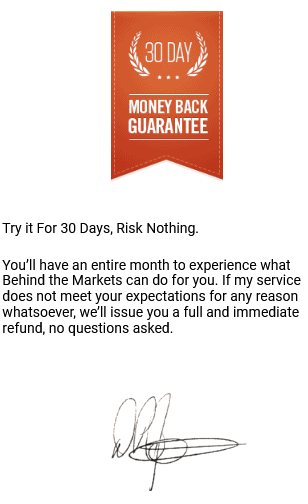 All the content you see here comes with an unconditional money-back guarantee if you’re not satisfied with what you receive.

At any point during the first 30 days of purchase, simply contact Behind the Markets for a complete refund, no questions asked.

Thirty days is the industry standard for stock-picking services.

This isn’t enough time to see a position through. However, it does give you a comfortable window to gauge the quality of Jovine’s analysis.

Behind the Markets Reviews

The first review is from subscriber Rod G. from Texas: 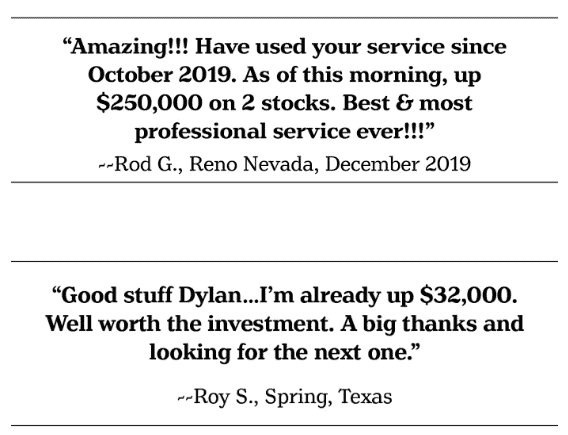 And here’s another solid testimonial from Dennis W. in Michigan:

While these are glowing reviews of the service, it’s important to remember that reported returns from testimonials may not be typical, but they could indicate what’s possible.

How Much Does Behind the Markets Cost?

Behind the Markets cost just $39 to join under the Good subscription. This is a great price, but you get even more value for upgrading to the Best Offer.

The basic membership comes with one of the bonus reports I mentioned: Hypersonic Missles. You still get 12 months of the newsletter, portfolio, and alerts.

There’s also the 30-day money-back guarantee, which lets you test out the waters risk-free. 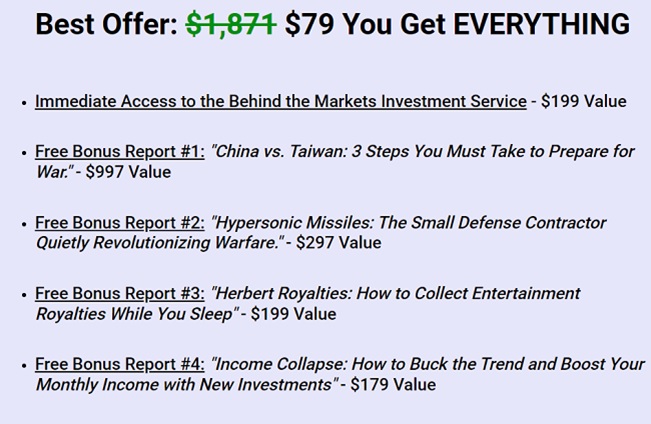 Behind the Markets is a rock-solid research service. Each feature included is worth more than you’ll pay for access to the entire package.

If you’re still on the fence, remember, that your purchase is covered with an airtight money-back guarantee, so there’s no way you’ll walk away unsatisfied.

Dylan Jovine is one of the few gurus directing his followers’ attention to the looming threat of a war between China and Taiwan. And this package includes a complete game plan that can protect you and your wealth from the worst possible consequences of a conflict.

At just $79, you can’t go wrong with Behind the Markets.