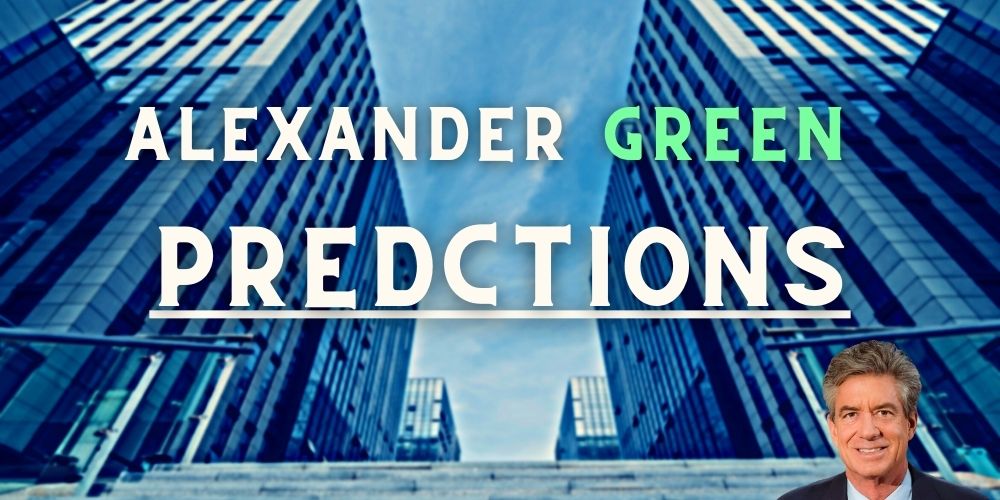 Alexander Green’s 2023 predictions about the New King of LNG are turning heads in investing circles. But is he really on to something? I’m putting Oxford Communiqué’s latest presentation and package under the microscope to find out.

Table of Contents show
1 What Is Alexander Green’s Prediction for 2023?
1.1 Where Did Putin Go Wrong?
1.2 Alex Believes Green Energy Won’t Bail Out Europe
1.3 Liquid Natural Gas
2 The New King of LNG
3 Who Is Alexander Green?
4 What Comes with the Service?
4.1 New Member Bonuses
5 Pros and Cons
5.1 Pros
5.2 Cons
6 How Much Does It Cost?
7 Final Verdict

What Is Alexander Green’s Prediction for 2023?

Alexander Green predicts that “Putin has made his biggest mistake of all time” and that it could trigger a shift in the global energy sector.

Further, he anticipates that this shift could open up a new investment opportunity for folks in the know — mainly in technology related to liquified natural gas (LNG).

He calls this opportunity The Next King of LNG.

The Oxford Communiqué team put together a new investment research package in response. It includes The Oxford Club’s flagship newsletter, as well as a selection of carefully curated research reports.

I’ll take a look at the deal a little further down.

But first, let’s do a deep dive into the presentation to see what Alex Green’s prediction is all about.

What is Putin’s major mistake?

Get the scoop on Alex’s LATEST predictions 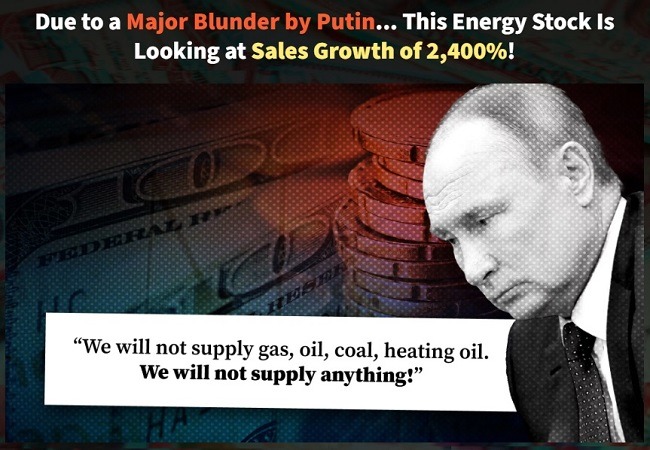 Where Did Putin Go Wrong?

According to Alex, while invading Ukraine helped turn Putin and “his country into the world’s biggest villains,” this was not his biggest mistake.

He says that Putin’s biggest mistake was shutting down the Nord Stream 1 Pipeline.

Before we dig into the implications of this action, it’s important to understand the context surrounding Russia and Europe’s relationship regarding energy.

Almost half of Europe’s natural gas supply was imported from Russia. This totaled an astonishing 155 billion cubic meters in 2021.

After the Nord Stream 1 Pipeline was closed, the price of natural gas in Europe skyrocketed, reaching as high as 350 euros per megawatt hour. 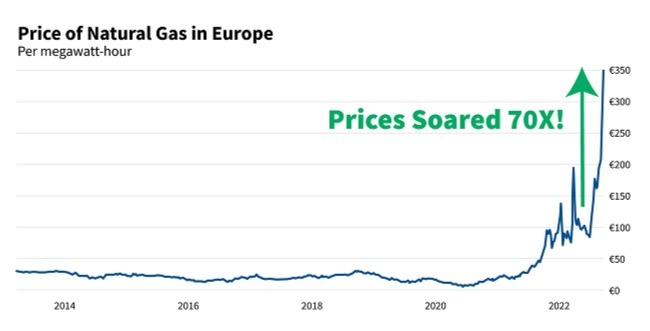 For reference, the cost of natural gas in 2020 was just 5 euros per megawatt-hour. So prices at one point increased by 70X during this two-year period.

This has had a dramatic impact on the everyday lives of folks.

Here are just some of the disruptions that skyrocketing prices caused in Europe:

While Putin succeeded in igniting an energy crisis in Europe, Alex says he didn’t anticipate a solution could be around the corner: one that might give another big player in the energy space to fill in the gaps.

So is green energy going to save the day?

Alex predicts that the answer is no.

Alex is pessimistic about the prospect of green energy pulling Europe out of this hole because he says it’s one of the root causes of their energy insecurity.

For clarity, Alex is not knocking on renewables and alternative energy. He’s critical of the country’s implementation.

I’ll let him take the floor:

“Well, the Europeans have been working hard for years to build up their “green energy” economy.

But in doing so, Europe largely stopped developing their own fossil fuels and instead pumped money into renewables like wind and solar power.

The only problem is… wind and solar aren’t reliable like natural gas. So in recent years, Europe has imported Russian gas to make up for their energy shortfall.”

In short, in an attempt to push forward it’s green energy initiatives, Europe compromised energy security by outsourcing it to Russia.

So if green energy isn’t the solution, what is?

Alex projects that it could be liquid natural gas.

Alex is predicting that natural gas might fill the void and help Europe evade a further energy crisis.

There’s only one problem: where will the natural gas come from?

The Oxford Communiqué team believes that it could be carried from across the pond.

And Alex’s The New King of LNG is spearheading technology that could make this possible — and more importantly, cheaper.

Let’s start with the price.

Comparatively, US natural gas is absurdly affordable compared to Europe.

Alex says that the price difference could make it one of the “great arbitrage opportunities in the history of the modern global economy.”

Here’s what he has to say:

“An arbitrage is when an item sells very cheaply in one place but is very expensive in another.

Smart investors can buy the product where it’s cheap… sell it where it’s expensive… and turn a profit on the difference.”

And not only is natural gas much cheaper in the US, but it’s also the largest producer by a large margin.

In spite of the US’ impressive output, transporting gas across the ocean opens up its own set of challenges.

Since natural gas requires a lot of space to transport, pipelines are the most common method of distribution.

So is the US about to build a pipeline straight to Europe?

Alex forecast that’s an alternative might be on the table…

His New King of LNG.

Alexander Green’s The New King of LNG is the company that he and the team believe could be poised to help Europe through its energy crisis.

The defining feature of this company is the technology it leverages to revolutionize the transport of liquified natural gas.

Its method of transport is both cost-effective and reduces the amount of waste.

Here’s what Alex has to say:

“The old cargo ships turned a profit of only about $15,000 per day… a tiny sum for international shipping.

But a new set of ships designed specifically for transporting LNG has come along… and multiplied the profitability many times over.”

The company’s biggest edge over its competition is the way in which it transports liquified natural gas.

The design of its dome-shaped tanks helps maintain a temperature low enough to keep the gas in a liquified state, without the use of refrigeration units.

Another way the design improves efficiency is how it utilizes waste.

This is perhaps one of the most difficult challenges with transporting LNG. It also causes unnecessary waste and cuts into the bottom line.

What sets Alex’s King of LNG apart from its competitors is its unique design that allows the ship to capture runoff.

Then, the ship itself uses it as energy for transport.

According to the team, these innovations have the potential to increase profits from $15,000 to $200,000 per day — not too shabby.

Another reason Alex is especially bullish on this company is its fixed long-term contracts.

It has fixed long-term contracts on 12 out of 13 of its vessels. So the pricing is locked in, even if the cost of gas eventually stabilizes.

Now that you know more about The King of NLG let’s take a look at the mind behind the service. 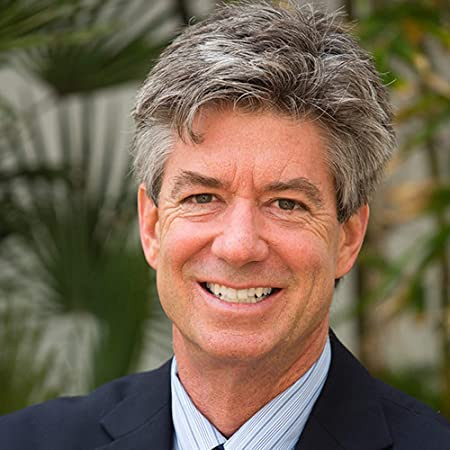 You may be familiar with his other popular newsletter services, Oxford Microcap Trader and Insider Alert.

He also has a long history in the stock market and Wall Street.

Before joining The Oxford Club, Alex wore quite a few hats, working as an investment advisor, research analyst, and portfolio manager.

His resume has a few more impressive entries.

He’s a best-selling author, and Hulbert Financial Digest has ranked his Oxford Communiqué as one of the 10 top-performing investment letters in the nation for the last 15 years.

In addition to the monthly newsletter, a membership to Oxford Communiqué offers several enticing features.

Read along for a look at each one. 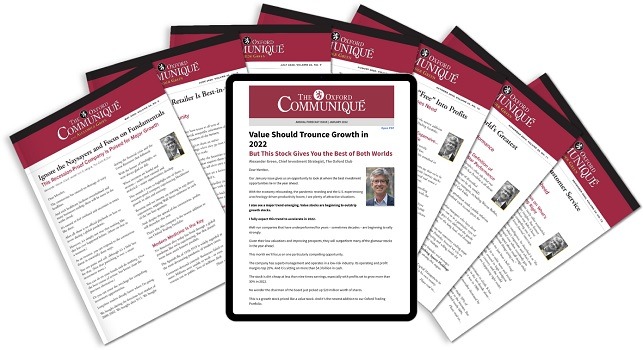 12 Months of the Oxford Communiqué Newsletter

Each month, the team delivers one new investment idea along with market commentary.

The recommendations lean into mid to large-cap stocks, with no particular bias on sectors. If Alex and the team believe they’ve spotted a solid opportunity, they’ll let members know.

Each position is logged into the model portfolio, and there are also weekly updates.

The new deal comes with five portfolios with distinct focuses.

Here’s a look at each one:

With each portfolio tapping into its own unique niche, these insights could be a good fit for a broad range of audiences.

A membership also comes with additional recommendations and analysis from the Oxford Communiqué team. 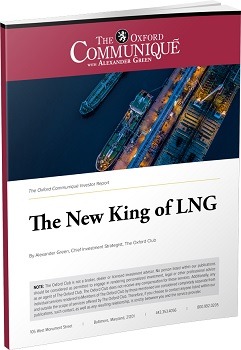 This bonus report reveals the ticker of Alex Green’s King of LNG.

It covers the entire opportunity in and out and provides additional info not found in the team’s presentation.

The team is tight-lipped about the company, but they do share some additional details.

They say that the company could generate as much as $200 million for each shipment headed toward Europe.

And it has a dozen ships that are fully booked, with a 54-year backlog.

To cap it all off, this LNG stock is paying out a 10% dividend yield. 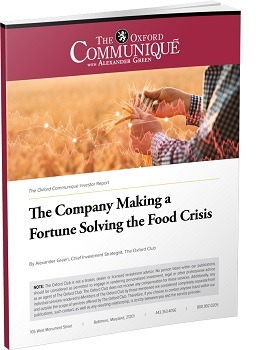 The Company Making a Fortune Solving the Food Crisis

This report dials in on one company that the team believes could be in a strong position to tackle food inflation.

So what’s so special about this opportunity? 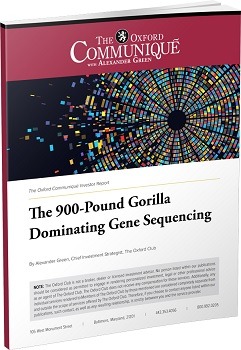 Alex and team anticipate that gene sequencing could play a major role in the medical industry down the road.

And they have identified one company that they believe has all the ingredients necessary to become a key player.

So far, the company has shipped over 20,000 sequencing systems across the globe to around 8,000 clients.

Its revenue has steadily grown by double digits since 2020. And some Wall Street analysts believe it could continue to rise another 15% this year. 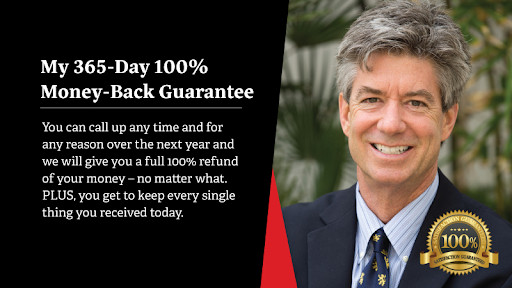 Under The New King of LNG deal, memberships are covered by Alex’s 365-day money-back guarantee.

This means you can check out the service for about a year. If it doesn’t live up to your expectations, you can opt for your money back on the cost of the subscription.

Most newsletter services of its ilk offer a 30-day money-back window. So The Oxford Club is 12X the industry average.

This could also be enough time to see a position to its conclusion, which is not true for many alternatives.

All in all, it’s a top-notch guarantee that shows that The Oxford Club stands by its work.

Make the most of Alex’s guarantee

The Oxford Communiqué offers a ton of value, but there are some places it could stand to improve.

How Much Does It Cost?

But under the latest deal, new members can sign up at the introductory rate of $49 for the first year.

This stacks up to an 80% discount, which is much more affordable.

It’s important to note that this is an introductory deal.

When the subscription renews after the first twelve months, the price will be $79 (a 68% discount).

While I’d prefer the initial discount to carry over, 68% off on the second year is still a great deal.

Plus, it’s all backed by the team’s 365-day money-back guarantee. 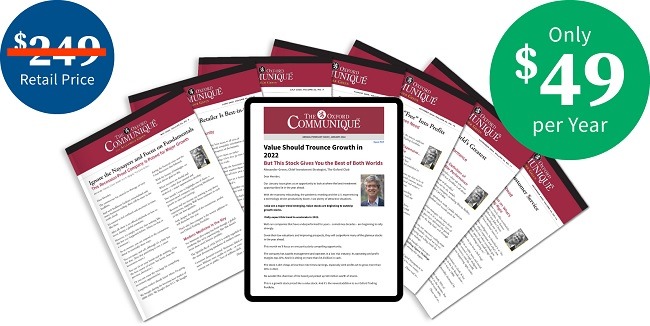 We’ll have to wait and see if events unfold as Alex projects that they could.

Still, I think he lays out an interesting investment thesis.

The technology centered around his presentation seems to have a lot of utility — even outside meeting an energy crisis in Europe.

Regarding the team’s latest package, there’s quite a bit to like.

It’s stacked with solid resources, including the monthly newsletter and special reports.

Plus, the 80% discount and 365-day money-back guarantee sweeten the deal further.

I recommend checking it out if you’re looking for market research and analysis from one of the Oxford Club’s brightest minds.

Get your first year of Oxford Communiqué 80% OFF