Cisco Competitors‏: Who Stacks Up Against This Tech Company? 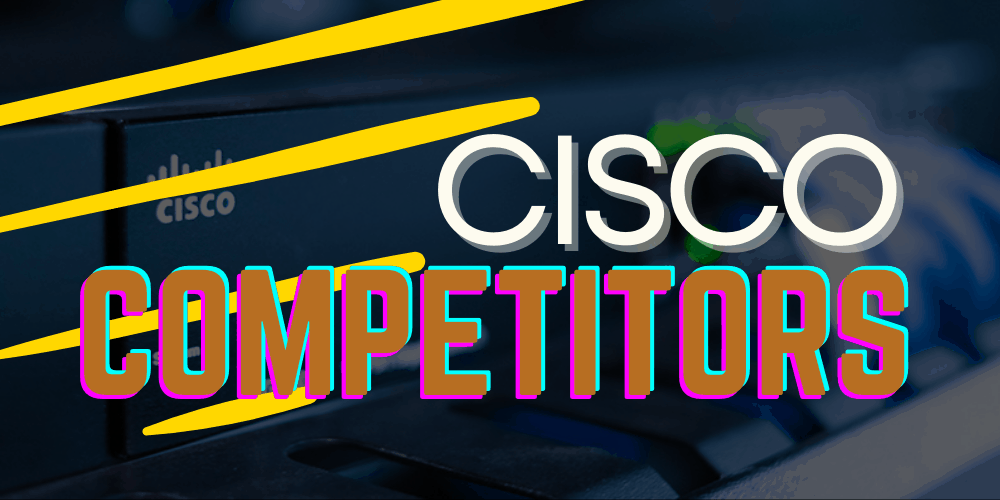 Cisco Competitors: Who is Cisco?

‏Cisco is a technology company based in America that was created in 1984 by two students of Standford University.

Leonard Bosack and Sandra Lerner started the company when they successfully linked their computers using router technology and were able to adapt them for large-scale use.

They provide equipment and services for networks and the company has experienced significant growth and has become a leading provider in VoIP technology.‏

‏The company went public in 1990 and is listed on NASDAQ under the ticker symbol CSCO.

The company has its headquarters in San José, California.

Cisco Systems supports IT teams through design, maintenance, and management for digital businesses.

The company is a leading innovator in networking, security, collaboration, cloud computing, and data centers.‏

‏Cisco is the industry leader in the highly competitive and high-growth areas of information technology, digital infrastructure, and online security.

The company is focused on growing its software business, and offering managed cloud computing solutions.

One of its most successful products is its Catalyst 9000 which is a series of switchers they developed for the cloud, mobility, and security.‏

‏On the application side of the business, they have introduced many products to the market including both software and hardware products.

This includes their VoIP products, conference platforms, and programs such as AppDynamics.

There are plenty of businesses competing for the patron of governments and other businesses as industries turn their attention to online working.‏

The main Cisco competitors are:

‏Their biggest competitor is the Chinese company Huawei which is one of the largest technology providers in the world.

It has over double the number of employees as Cisco with over 190,000 working for them.

They offer infrastructure solutions as well as a line of smart devices for businesses and casual consumers.

‏Despite revenues that are almost twice that of Cisco, at $103 billion in 2018, the company lags behind in the key areas it competes with Cisco.

For example, the enterprise networks market has Cisco with a market share of 55.7% while Huawei only has 9.3%.

This area includes technology like data centers, servers, wireless, and networking but only accounts for around 10% of Huawei’s total revenue.‏

‏Aruba competes with Cisco for providing networking and security solutions and is a part of the Hewlett Packard Enterprises company.

Aruba was founded in 2002 and is an American company.

They were acquired by HP in 2015 and are currently headquartered in Santa Clara, California.

The company provides solutions for companies that range in size from small businesses to large corporations.

The bulk of its revenues is derived from the sale of products with services making up around 10% of its total revenue.‏

‏The company operates on a global scale and has total revenues of $3 billion as of 2019.

They also have 6,000 employees in its workforce.

Aruba has made several acquisitions that have helped expand into international markets such as Amigopod Pty Ltd.

Assets and Technology in Australia and Cape Networks in South America.‏

‏Aruba is the main competitor for Cisco in the WLAN infrastructure and wireless market and they account for a 20% market share.

Cisco is comfortably ahead in the competition as they hold a 45% market share.

Aruba is a growing company that offers a lot of products like Wi-Fi access points, routers, location services software, and network management.

They hold a strong position and are well-positioned to keep challenging Cisco for business.‏

‏Juniper is another American technology company that was created by Pradeep Sindhu in 1996.

They are in operation in North America, South America, Europe, and Asia with offices in 47 countries.

Juniper is an innovative company and offers products like firewall and automation software.

The company has proven itself to be a strong competitor to Cisco but is significantly smaller in size and sales.‏

‏The company is publicly traded on the New York Stock Exchange under the ticker symbol JNPR.

They are also included in the S&P 500 stock market indexes which is one of the most popular equity indices on the market.

Juniper may not be as large as Cisco but they certainly a competition to watch out for as they have been able to take some of Cisco’s market share.‏

‏Cisco is comfortably ahead of its competition in many of the areas they do business.

Thanks in part to an earlier start than most of its competitors.

Since Cisco has been around longer they have been able to capitalize on the aggressive digital expansion that has happened over the last 20 years.

They remain the worldwide leaders despite strong competition from large corporations such as Huawei and smaller competitors like Aruba, Arista, VMware, and Juniper.‏

‏Cisco has a significant size and scale advantage over most of its competition which means it’s able to acquire new technologies and business while scaling its sales using its existing channels which reduces its costs.

Due to its size and revenue, Cisco can invest less in research and development but still far outspend any of its competitors.‏

‏Thanks to its comfortable position at the top of the pack Cisco does not need to be too concerned by its competition.

However, cloud computing, digital infrastructure, and networking are in high demand and the competition is fierce.

Cisco needs to remain innovative through new products and acquisitions to keep its position at the top.‏

‏Online technology is constantly evolving and new products are being introduced to the market all the time.

Cisco can remain top of the industry as long as they keep providing products that work well and are competitively priced.‏