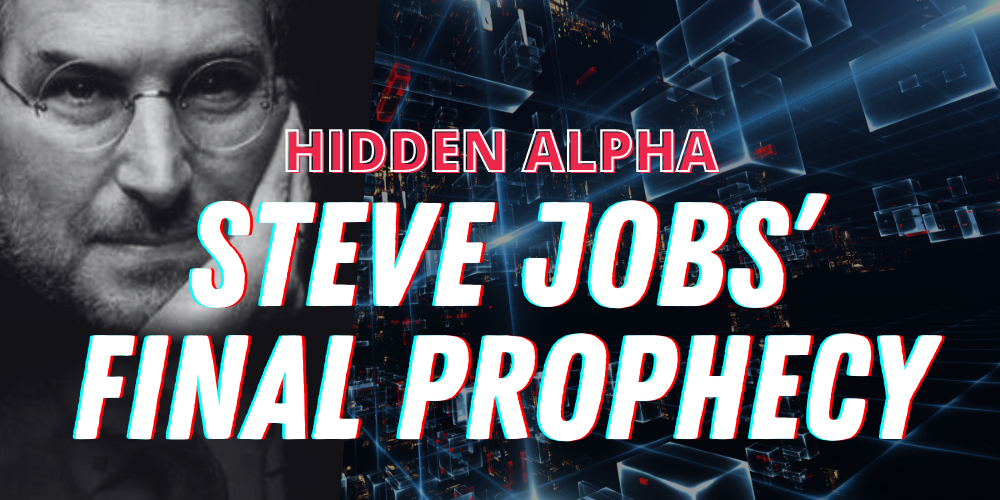 In his latest presentation, Joel Litman reveals that Apple founder Steve Job’s last predictions could be coming true right before our eyes. Litman believes it could be a tremendous investment opportunity, but is he really on to something? Read our Steve Jobs’ Final Prophecy review to get the full story.

What Is Steve Jobs’ Final Prophecy?

Before his passing, Steve Jobs made a final prediction that an emerging tech could spark breakthroughs in key industries across the globe. Some industries Job’s believed would be affected include healthcare, automotives, energy, and much more.

We’re not talking about the typical technology everyone is already investing in. Steve Jobs’ last prediction isn’t referring to:

Today, we’re seeing signs that Jobs may have been right, and the resulting shift could have a tremendous impact on every corner of the global economy.

Before we dig into the specifics of Jobs’ final prediction, let’s take a closer look at Steve Jobs to see why his predictions have held so much weight.

Who Is Steve Jobs?

Steve Jobs was a visionary entrepreneur with keen foresight. Today, Apple, the tiny company he founded in his garage is worth upwards of $1 trillion.

Steve Jobs’ visionary status was earned by his uncanny ability to anticipate the future of tech and other fields.

He accurately predicted many of the most consequential inventions and investment trends of recent memory, including:

Over many years in the entrepreneurial spotlight, Jobs developed a cult-like following, and he’s hailed as a genius for his insight and cunning. He was the driving force behind several technological advancements that wowed users and even his competitors.

His company, Apple, was behind the first successful mass-produced computers with a graphical user interface. Jobs’ team also developed Apple Lisa, a popular operating system named after his daughter. Since then, Apple has been a leading computer manufacturer, as well as an innovator in a variety of technologies.

Shortly before his tragic death, Job’s final prediction was still years away from becoming reality. He predicted that two of the world’s most cutting-edge industries would soon intersect to form an entirely new field: SynBio.

But now, his vision is rapidly becoming a reality, and many are taking notice.

In fact, Hidden Alpha’s Joel Litman is bringing this unfolding phenomenon to his follower’s attention with his Steve Jobs’ Final Prophecy presentation.

We’re going to break down everything you need to know about it in this review, so stay with us. But first, let’s take a deeper dive into the people behind the service.

What Is Hidden Alpha?

We have an in-depth Hidden Alpha review, but it’s not required reading for this package.

If you sign up under the new deal, you get a 12-month subscription to Hidden Alpha with your purchase, including the full assortment of member benefits.

Hidden Alpha is a great service backed by a top-rate team. It’s an excellent addition to the Jobs’ Final Prophecy bundle, and it will keep you busy with monthly stock picks for a full year.

Who Is Joel Litman?

Joel Litman is a seasoned finance veteran and one of the world’s leading forensic accounting experts. Litman leads the Hidden Alpha service and serves as its chief advisor.

Litman’s expertise is a valuable asset for Hidden Alpha readers. He has a knack for pinpointing promising large-cap stocks that the mainstream market has overlooked, and members get first-hand access to his latest findings.

Litman has built a solid track record throughout his career and earned widespread respect in his field.

Today, he serves as the Chief Investment Strategist for Hidden Alpha’s publisher, Altimetry, and he holds the title of CEO and President at Atimetry’s parent company, Valens Research.

Litman has appeared on CNBC, and Barron’s and Institutional Investor have both quoted him in their articles. He’s even been published in the Harvard Business Review!

Joel Litman is a qualified guru with a stellar resume. When he offers his opinions on the market, it’s usually worth listening to, and he sees a big opportunity developing that could prove Jobs’ last prediction correct. 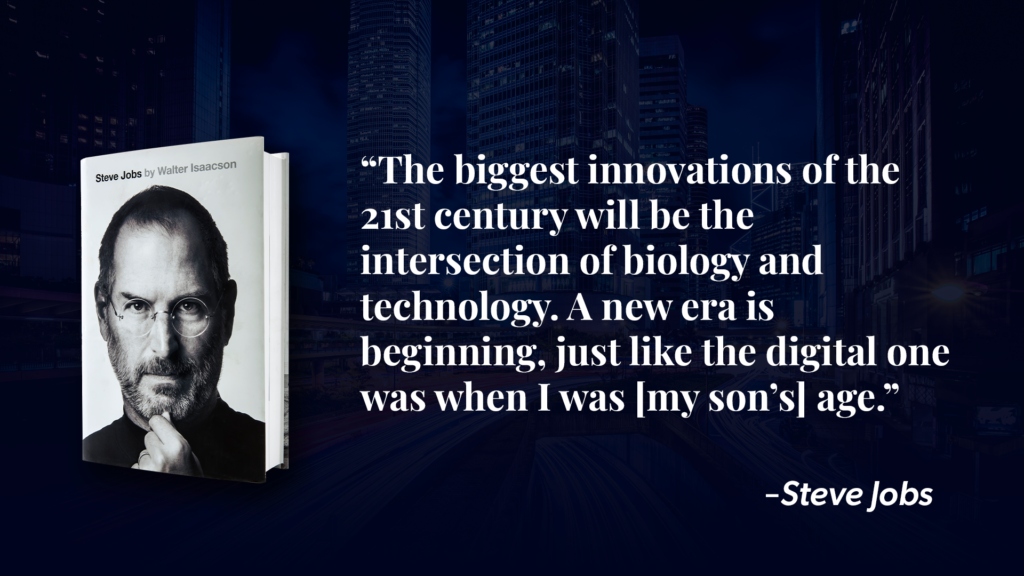 The last words Steve Jobs shared about the intersection of technology and biology seem to be coming true. The first major milestone came in January 2020 when researchers remotely sequenced the virus responsible for the COVID-19 pandemic.

Researchers used this digital model to isolate the spike protein that would eventually be used to develop an mRNA vaccine to prevent the disease. Litman believes this underreported event marked the beginning of a new era centered around collaboration between technology and biology.

Litman calls this new industry SynBio, and he believes it could have an enormous impact on the entire global economy and fuel a new era of growth.

The Case for SynBio

The implications could be enormous. Some examples of potential technologies include self-healing rubber, humane animal-based insulin, and much more.

Now could be a great time to get in on this under-the-radar tech, especially while much of the market is still stuck on 5G, electric cars, space exploration, artificial intelligence, virtual reality, etc.

Don’t get us wrong, EVs, AI, and the lot are fantastic, but they’re technologies dominating today’s headlines: everyone is already in the know. Some of the biggest investment gains come from getting in before the boom.

Plus, with so many big-named digital technology stocks crashing, it might be time to turn focus on companies for the potential for real growth.

SynBio tech has endless potential; just as Steve Jobs predicted, it could revolutionize the world. As it was with the last tech boom, early investors could see massive returns.

With so many tech stocks crashing, many folks are looking for a new angle on the market. And SynBio could be the next big boom.

Joel Litman has identified several companies trading on the stock market right now that could dominate their industries in the years ahead.

He has assembled his work into a collection of exclusive reports as part of his Steve Jobs’ Final Prophecy bundle for Hidden Alpha. Altogether, they feature five of his top-rated SynBio stocks.

What’s Included with the Prophecy Bundle?

Hidden Alpha Newsletter – As a Hidden Alpha member, you’ll receive Joel Litman’s latest stock picks, research, and analysis right in your inbox on the first Monday of every month. Litman keeps you informed on all the latest market-moving news, and you’ll be the first to know if he discovers another promising SynBio stock.

Updates and Alerts – Joel Litman sends out alerts whenever it’s time to make a move. You’ll receive both buy and sell alerts as part of your Hidden Alpha subscription. You’ll also receive updates on the stocks featured in Joel Litman’s model portfolio so you can stay up to speed on each recommendation’s progress.

Joel Litman’s Research Archives – You also get access to an archive containing the entire collection of Joel Litman’s research for Hidden Alpha, including his previous special reports and much more. SynBio is today’s hot trend, but Litman has shared tons of valuable insights over the course of his tenure with Hidden Alpha. The archives give you first-hand access to all of it.

My Favorite SynBio Investment Right Now – The featured report in the collection includes in-depth analysis of Joel Litman’s favorite SynBio play, Illumina. As covered above, this company is a leading player in the DNA sequencing industry and has demonstrated tremendous promise over the past couple of years.

Profiting From the NEXT Big SynBio Wave –  Buying Illumina is just one way to play the SynBio boom. According to Litman, buying the next big wave of winners is another important part of the strategy. Litman has identified two SynBio-platform companies that could have tremendous upside, and he laid out his findings in this bonus report.

Buy the Platforms — Your Best Shot at a 1,000% Winner – The tech boom taught us that platforms like Facebook, Google, and Amazon can grow rapidly when a transformative trend takes off, and SynBio could be no exception. Companies that create and host ecosystems that effectively harness SynBio innovations could be in the same class as the Big Tech behemoths that dominate today’s market. 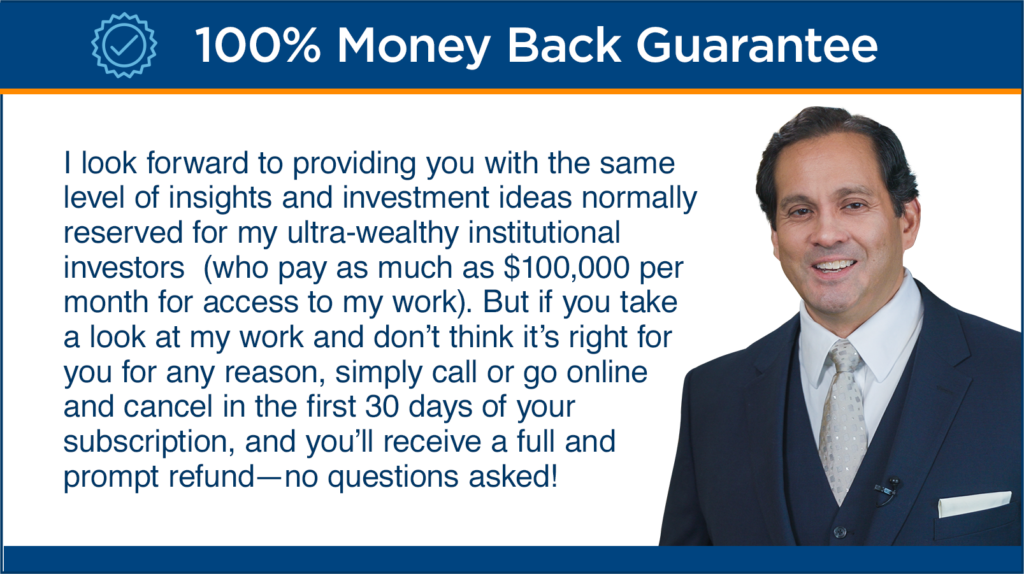 Every Hidden Alpha subscription includes a 100% money-back guarantee from Joel Litman. You have an entire 30 days to test drive the service. If you don’t like it, you can get a full refund.

Simply contact the Hidden Alpha member services team within 30 days of your purchase and let them know you’re not satisfied. Then, they’ll issue a full refund for your subscription cost.

The money-back guarantee provides reassurance for anyone who has doubts about the service. Thirty days is plenty of time to decide if it’s a good fit, so you can subscribe with confidence.

The Steve Jobs’ Final Prophecy bundle is great, but it does have its ups and downs.

Here are all the pros and cons:

>> Sign up now to start enjoying these great benefits <<

How Much Does Hidden Alpha Cost?

You can sign up under the Steve Jobs’ Final Prophecy deal at a substantially discounted rate.

Typically, a one-year subscription to Hidden Alpha costs $199, but our readers can access a special reduced rate.

If you sign up now, you’ll pay just $49 for the complete bundle. That’s a 75% discount on the full sticker price.

Better yet, you’ll still get all the bonus reports covered in this review, including Joel Litman’s top-5 SynBio stock recommendations 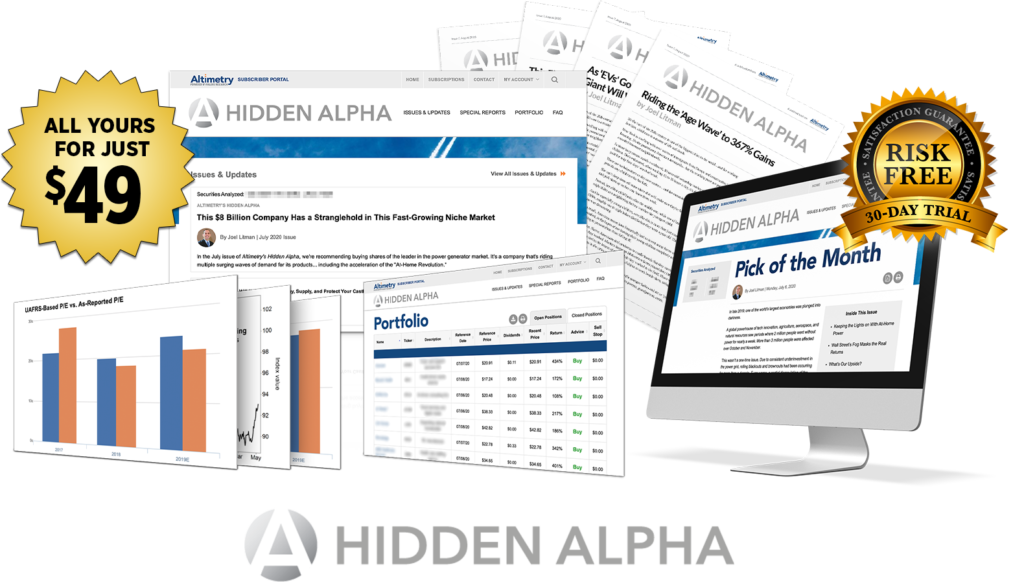 Is Hidden Alpha: Steve Jobs’ Final Prophecy Worth It?

Hidden Alpha is a great monthly research service in its own right, but the Steve Jobs’ Final Prophecy bundle is a downright bargain. You get a full year of Hidden Alpha, plus a treasure trove of additional research.

Joel Litman’s top-rated SynBio stocks and his Perfect Portfolio could put you in an excellent position to see enormous returns from this unfolding tech trend.

With monthly newsletters, regular updates, and a bonus market daily e-letter, you have an arsenal of investing insights from top-rated experts at your disposal every time the market is in session.

Just as Steve Jobs’ final prophecy predicted, SynBio could be an enormous growth industry, and this package equips you to make the most of the opportunity.