These Are The Best Whatsapp Alternatives – Protect Your Privacy 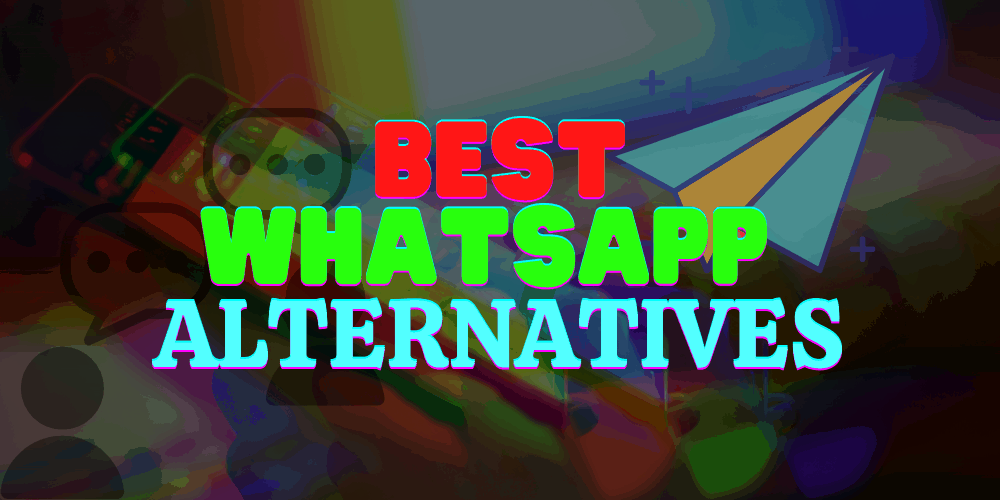 In a dramatic turn of events, Whatsapp is switching from its secure privacy policy to one that doesn’t exactly guarantee “privacy,” which is why many are looking for Whatsapp alternatives.

This update has sparked many conversations on social media with the topic “Whatsapp” trending for days.

Whatsapp Alternatives: The Type of Data Facebook Will Collect

This doesn’t mean Whatsapp is terminating its end-to-end encryption, which prevents third parties from spying on messages.

To use Whatsapp, you’ll need to grant the company permission to read and store your chats.

Also, a lot more data including connection strength, time zone, language, and internet service provider will be collected by Facebook.

Facebook collects users’ locations even if location services are off.

It also seems there’s no way out for users who want to opt out of the messenger app.

Even if you close your Whatsapp account, your information will still be stored with them.

Although it’s still not entirely clear how Whatsapp makes money with the chat messenger, ads are not being introduced yet.

Judging from the sudden update to its privacy policy, Whatsapp might announce an ad display on short notice which is why users would want to find suitable Whatsapp alternatives.

If you’re familiar with tech news, you would have encountered the Cambridge Analytica scandal at least once.

The negative affair exposed the role of Facebook in collecting large amounts of user data.

Subsequently, this data influenced voters’ opinions in two major elections in the United States of America.

If we’re to believe the term “history repeats itself,” then it’s almost certain that Facebook will misuse the information of Whatsapp users.

This spells out several privacy concerns because a lot of individuals share sensitive data with their Whatsapp contacts.

Scrutiny of a person’s Whatsapp chats can reveal much about that entity.

There’s also the question of what happens if Facebook is subpoenaed for a particular user’s information.

If you feel uncomfortable with this infringement of privacy, there are other chat applications you can switch to.

Below, you’ll find the most secure chat apps available on the internet.

The first thing you should look for when migrating to a new chat app is end-to-end encryption.

It is a type of encryption that secures a message and prevents third parties from understanding it if it gets intercepted.

Take it like using a special language only you and your best friend can decode.

End-to-end encryption also ensures that a message can never be decrypted and changed in transit.

Although Whatsapp is retaining its end-to-end encryption feature, the new privacy policy proves that it can read chats between two parties.

Signal takes the top spot here because it is user-friendly. This means former Whatsapp users can easily adapt to this new app.

Signal is an open-source app that advocates for the total privacy of messages.

Several journalists and tech-savvy individuals use Signal to exchange messages.

These advocates include Jack Dorsey, CEO of Twitter, Elon Musk, CEO of Tesla and SpaceX, and Edward Snowden, an American whistleblower.

The tweets endorsing Signal led to a huge jump in user registration.

Over a few days, Signal became the most installed free app in countries like India, Germany, and Hong Kong.

In the messages privacy aspect, Signal is tested and trusted.

In 2016, the chat messenger was subpoenaed by the state of Virginia in a bid to get information about a case.

Signal could only provide the times when the users signed up for their accounts.

You can send a self-destructing message on this chat app.

Also, Signal can be strengthened with a password to prevent anyone from accessing your chats.

Telegram is another private chat app that you can use.

An advantage this app has over Signal is that you’re more likely to find your friends on Telegram.

It is one of the top three widespread messenger apps with more than 500 million active users, a quarter of Whatsapp’s.

With Telegram, you can encrypt your chats using its “Secret Chats” feature.

In this mode, you can set your messages to self-destruct under custom conditions.

The disadvantage with this app is that you’ll need to activate “Secret Chats” to prevent your data from getting stored on the company’s servers.

If you’re certain that you won’t forget to turn on the feature, you can use Telegram.

On January 9, 2021, the company revealed that 25 million users had registered for the app in three days.

Messages, previously known as iMessage, is an encrypted chat app available only for Apple users.

If you’re using Messages, make sure that the receiving device uses Apple’s OS.

A message from the app to an Android device appears as a traditional text message.

On Messages, you can set the duration you want your message to remain visible.

You also have the option to activate automatic self-destruction of a message once you view it.

Its end-to-end encryption feature is available across all iOS devices.

If you’re using this service, ensure that you never save your messages to Apple’s iCloud storage.

If it’s saved, your messages end up on Apple’s servers, defeating the purpose of using the chat messenger.

Jabber/OTR is more of a protocol that provides secure communication.

Practically, it is the most secure platform on this list. However, people without extensive tech knowledge rarely use Jabber/OTR.

Hence, it is unlikely you’ll find your friends using this app.

Also, you can’t use this protocol to send files like images or videos.

However, if you’re looking for something near-perfect for private messaging, Jabber/OTR is your top option.

Whatsapp Alternatives: Measures to Secure Your Privacy on the Internet

Before you install apps on your mobile device, you must have noticed they request permissions.

These permission requests range from accessing contacts to the camera and might be needed by the app to work properly.

For instance, a ride-sharing app can only work effectively when you permit it to access your location.

Nevertheless, some apps request permissions for things they don’t need.

Why should a calculator app request access to your camera or microphone?

It would likely try to siphon data from your device to sell on the internet.

If there are apps that access more than they need to on your device, you need to uninstall them or limit their permissions.

In short, VPNs create a safe passage for your internet traffic to flow through.

VPNs protect your privacy on the internet by rendering your identity secret.

It performs this action by changing your IP address, making it seem like you’re in a different location.

This way, advertisers won’t be able to track you on the internet.

This technology also protects you from hackers when using public Wi-Fi.

Usually, Wi-Fi networks at areas like libraries and airports can harbor hackers attempting to spy on your activity.

A VPN app blocks any possibility of this through its encryption feature.

The Onion Router, also known as Tor, is a network that boosts online privacy when a user is browsing the internet.

All activity on the Tor browser is never recorded and receives a high level of encryption.

The encryption works through random bouncing off your web traffic. This way, anyone attempting to track will find it difficult.

The more servers available on the Tor network, the harder it is to track your activity.

Whistleblowers and journalists use it frequently for privacy. When used with a VPN, you get a very high level of cyber privacy.

Tor Browser is available on a wide range of operating systems like Windows, Linux, and Mac.

The issue with using the browser is that it could get really slow when loading pages. Also, you can’t access several “surface web” sites with Tor Browser.

This has given several individuals reason for concern with many people migrating to other apps.

You can use Telegram, Messages, Signal, and Jabber/OTR for secure communication.

If you want to further protect your online activity, utilize a VPN, use Tor Browser, and review app permissions on your device.