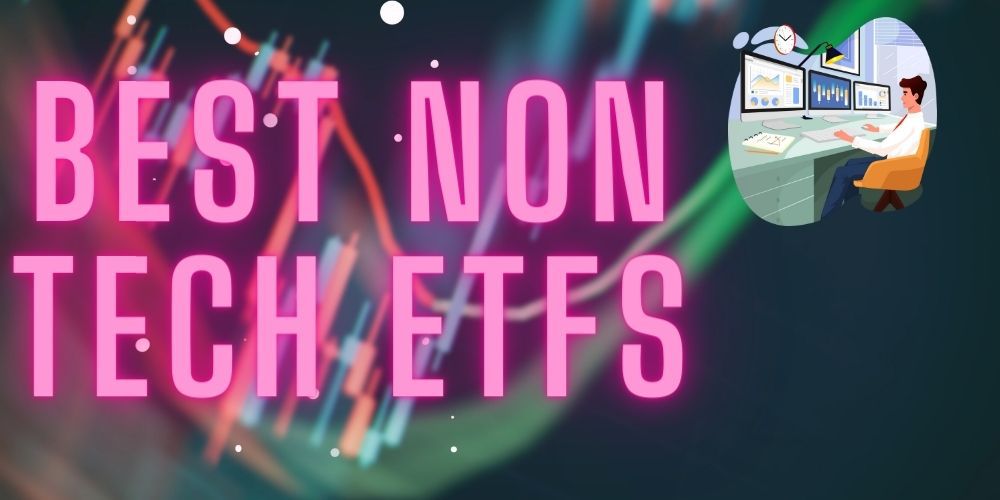 The technology sector has yielded massive returns for investors for over a decade. But the days of making easy money on tech might be gone—at least for now. However, other sectors have maintained steady growth despite the challenging economic environment. So what are the best non-tech ETFs to buy now? Let’s take a look.

The iShares U.S. Consumer Staples ETF seeks to track the investment results of an index composed of US equities in the consumer staples sector.

iShares funds are managed by BlackRock—the largest asset manager in the world with over $10 trillion in assets under management.

Consumer staples tend to act as a safe haven during unstable market conditions due to their non-cyclical nature.

But more importantly, the exchange-traded fund has no exposure to tech stocks. 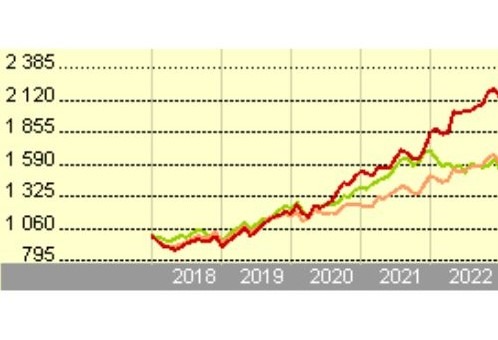 Consumer staples are considered to be a boring investment by many. But while the fund might not have performed similarly to riskier assets, it has a track record of steady growth.

IYK has been climbing a slow and steady staircase since the 2008 recession, returning investors upwards of 400% in profits.

The fund’s performance trails slightly behind the stock market’s average return, yielding an average of 8.98% since its inception.

But IYK performed considerably better than the S&P 500 during that period, which only grew by 150%. Perhaps it is not such a bad idea to entertain a boring fund.

At a 0.39% expense ratio, IYK is not the cheapest fund on our list to maintain, but the fee is still below the average.

The fund is also forward-looking, boasting an ESG rating of AAA—the highest score an ETF can achieve.

If you are a dividend investor looking to escape the tech storm, VYM is an ETF worth looking into.

The Vanguard fund seeks to track the performance of the FTSE High Dividend Yield Index.

VYM is comprised of over ten different sectors, with most of the weight going into Financials (20%), Healthcare (15%), and Consumer Staples (13%).

The fund offers diversification, but it’s weighted primarily into defensive areas of the market. Allowing investors to gain exposure to a broader market segment without exposure to excess volatility.

Only close to 6% of the fund comprises tech companies, and none of its top ten holdings have significant exposure to that sector. 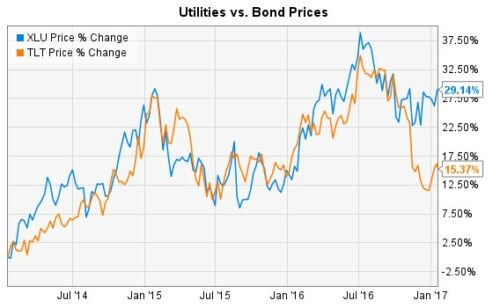 Exxon Mobile (XOM) and Chevron Corp (CVX) are part of the fund’s top four holdings, which could help it gain momentum if energy prices continue to rise.

The fund has had its up and downs throughout the years, but generally speaking, VYM has been able to sustain an upwards trend since the last recession.

Since then, the ETF has returned investors nearly 400% in profits without factoring in dividends.

If the stock appreciation wasn’t enough, shareholders could also benefit from its 3% dividend payout. A payment that can be compounded by growth or taken in as income.

Vanguard funds pride themselves on having expense ratios that are way below the average, and VYM is no exception.

The ETF charges a mere 0.06% in expenses, comparably considering similar funds charge an average of 0.91%.

XLV is an exchange-traded fund that invests in healthcare companies within the S&P 500.

Like consumer staples, the healthcare sector tends to perform well despite economic conditions.

After all, healthcare takes priority for most of us, particularly when it comes to emergencies.

But choosing the right healthcare ETF may not be as straightforward as one might think if one wants to avoid tech exposure.

A lot is happening in the healthcare industry that involves innovation and tech, particularly when it comes to biotechnology.

XLV does have some exposure to biotech (16%), but the composition does not appear to have severely affected its performance. XLV is only 6% shy of its all-time high.

Like other funds on this list, XLV has, for the most part, yielded continuous growth since the great recession. The ETF is up 540% since its 2008 bottom.

Despite an outstanding performance and multiples of growth, the fund has been able to remain fairly well priced.

Its current Price to Earnings ratio is 16.77 multiples, lower than the sector’s 26x average.

XLV also offers shareholders a shy dividend of 1.07%, not wildly attractive but a cherry on top when measured against the fund’s performance.

Its expense ratio is also among the lowest on our list, coming in at only 0.10%.

The ETF has had a good long run, but can it maintain its performance in the future?

Analysts believe the sector will grow at a (CAGR) of 7.93% through 2030. But there is some evidence that the trend could accelerate after that.

By 2030 every Baby Boomer will be of retiring age, making up about one-fifth of the American population.

The growing aging population could accelerate the demand for medical services beyond 2030.

Life expectancy among this age group is also expected to be longer than its predecessors, which could prolong their need for medical care.

Another factor that could influence the sector’s future performance is the long-term health repercussions of the novel coronavirus.

There have been reports by the CDC related to its long-term effects, which could impact a segment of the population.

As its name implies, VPU is comprised of 65 companies in the utility sector. Utilities also fall under a similar basket as consumer staples and healthcare, being a necessity.

VPU doesn’t have tech exposure, which has helped the fund shelter itself from the recent market volatility.

It doesn’t take a market specialist to zoom out on a price chart like the one from DUK to admire the company’s continuous growth. The price uptrend is clear and continuous.

The same can be observed in the VPU price chart. The ETF has maintained a resilient uptrend since the last recession.

VPU has yielded slow and steady growth of nearly 230% since its 2008 bottom.

Utilities had a great year in 2022. The global market grew at a CAGR of 8.2%, and it’s possible that the trend could continue in 2023 and onwards. 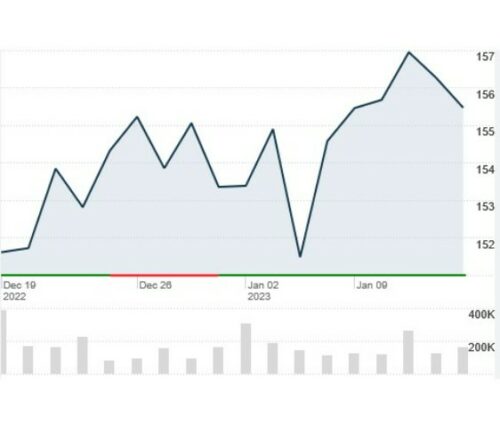 There is a lot of uncertainty around the energy markets, which is affecting the performance of utility companies.

Even if the war in Ukraine were to end tomorrow, it’s uncertain when, how, or even if Russian energy will re-integrate into the global open markets.

The geopolitical environment and the risks associated with the uncertainty could help the utility sector move higher.

Energy was the best-performing sector in the market in 2022. If we were to see a similar trend in 2023, utilities could benefit from it.

The introduction of renewable energy sources is also influencing the sector. This development is likely to continue into the near future.

In the meantime, the utility sector could continue racking in profits.

VPU has almost no exposure to emerging markets.

This is a potentially beneficial factor considering how the United States is positioning itself within the energy sector.

The fund offers a cheap expense ratio of 0.10%, comparably low to similar funds, which charge 0.88% on average.

It also offers an attractive dividend payout to shareholders of 2.7%.

Are Non-Tech ETFs a Good Investment?

Non-tech exchange-traded funds could be a great investment choice under the current economic environment.

Seeking a safe haven away from the technology sector storm could help investors balance their portfolios.

Investing in non-tech ETFs offers many advantages over investing in single non-tech companies.

Choosing a non-tech ETF could help investors be more passive and diversified in their investment approach.

By purchasing an ETF, investors don’t need to worry about the nuances of investing in a single stock.

Tracking earnings and news are less relevant since the performance of a single stock will not severely affect the fund.

Exchange-traded funds offer a broader sector exposure, simplifying investing by removing the need to manage an entire portfolio of stocks.

Sector ETFs can be helpful for technology investors unfamiliar with other industries.

One could use them as a temporary alternative while waiting for the tech market to regain speed.

It could take a great deal of homework to familiarize yourself with the companies involved in a new sector.

Rather than doing that, investors could analyze a specific sector and bet on an ETF that tracks it.

Tech has been a no-brainer investment over the last decade that has yielded excellent results for Wall Street. In fact, tech investing has almost become synonymous with growth.

But the bubble has popped for most tech stocks, erasing over a decade of profits in just a few months. Even shares from top tech companies like Apple are struggling.

The downturn has left many investors disoriented and looking for ways to hedge their portfolios or diversify into other market sectors.

Fortunately, the stock market has many investment opportunities that fit different investment strategies.

Dividend investors could opt for an ETF like VYM, while those looking for a longer commitment could find XLV compelling.

While the profits have been great for everybody, the easy money could pose a real danger for young investors.

Are Tech ETFs Worth It?

Tech ETFs were a compelling option for investors looking for high growth potential. But the tie has turned on investors as the sector is currently experiencing a period of uncertainty. The tech sector could make a comeback, but it’s uncertain if or when it could happen.

What Does Warren Buffett Think of ETFs?

Warren Buffet is well known for suggesting exchange-traded funds as an investment vehicle. Buffet has openly shared that he recommends buying ETFs like the S&P 500. He thinks these investments offer diversification and require little effort to manage.

Is There an Inverse Tech ETF?

Inverse ETFs offer investors the opportunity to profit from a decline in the value of an underlying benchmark. There are several inverse tech exchange-traded funds available for investors.

Some of the best-known include:

Is it a Good Idea to Buy Inverse ETFs?

Inverse exchange-traded funds are a risky investment vehicle unsuited for risk-averse investors. It might not be a good idea to buy an inverse ETF if you are an unseasoned trader with a lower risk tolerance.

What is the Best ETF for Tech Stocks?

Several great ETFs are comprised of tech stocks, not just one. Each has a different approach to investing in technology.

Some of the best-known tech sector ETFs include: