The space exploration industry is changing quickly, which makes now an exciting time to invest in the industry. Space tourism has long been considered a thing of the future, but with technology changing quickly, it might be coming sooner than you think. We’ve rounded up the best space stocks for investors to check out right now.

This California-based space company has a long and interesting history. While they began as a rubber manufacturing company, they transitioned into the space industry in the 1940s.

Today, the company has aerospace and defense contracts, and they’re also involved in real estate. Their diverse operations make them stand out from many other space companies on the market. Business diversity can also help keep a stock price stable during a difficult market.

Aerojet Rockedyne makes missile defense systems, which means that they have plenty of solid government contracts. They also develop and produce technology for human space exploration missions. They have a long history with NASA and have been involved in many of the US’s most exciting space missions over the years.

Like many others, this stock dropped dramatically in early 2020, and hasn’t quite returned to the highs it hit last year. However, this actually means there’s still plenty of potential here for investors.

Aerojet Rocketdyne has a long history as a government contractor. This trusted relationship sets them up for future success if the US government decides to continue or expand their aerospace projects.

Northrop Grumman is one of the top space companies in the world. They have contracts with governments around the world to develop space and defense technology.

Northrop Grumman has increased their involvement in the space industry over the last few years. From 2018 to 2020, they developed the OmegA space launch, although this ultimately wasn’t selected for a government contract.

Up next, they’re part of the US’s National Team to develop a lunar lander. They have a contract to develop the Transfer Element, which essentially allows the spacecraft to dock once it reaches the moon. Northrop will also develop HALO, a module built to orbit the moon that will serve as a stop for astronauts before they land.

Additionally, they provide support to NASA for several key telescopes. They’ve also developed the Cygnus, a spacecraft that carries cargo to the International Space Station.

In addition to their involvement in the space industry, Northrop is involved in some of the US government’s largest defense contracts. In the third quarter of 2020, they beat investor estimates for both earnings and revenue.

This space stock has fluctuated in price over the past several years, so investors should approach this stock with caution. However, their defense contracts are likely to give them a financial buffer. Expanding their involvement in space related projects will only help them grow their market share.

>> Automatically Invest Your Spare Change Into The Best Stocks <<

Iridium Communications is known mainly for their network of satellites. The Iridium satellite network services satellite phones worldwide, providing voice communications and even data and internet service in some cases.

The company launched their first satellite constellation in 1998, although it was not particularly successful. In 2017, Iridium partnered with SpaceX to launch their second set of satellites into orbit. They completed the second constellation in 2019.

Now, Iridium Communications is working on a plan to launch a set of spare satellites, should the need arise. For this, they are working with Relativity Space.

Iridium stock has been on an upward trajectory this year. Its current price has exceeded its pre-pandemic value.

Their stock is also very affordable, and data indicates it could be undervalued. This means it has excellent growth potential for the future. 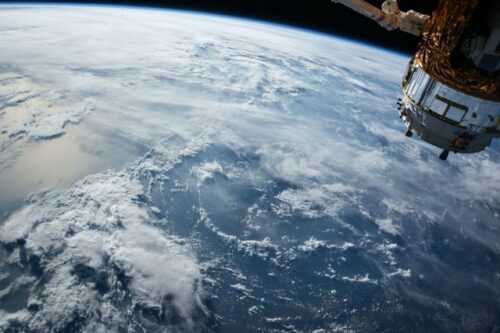 Virgin Galactic is an exciting company that is developing commercial space technology. They are part of the broader Virgin Group and are based in New Mexico.

Virgin Galactic is working on a spaceplane, the VSS Unity, which completed testing flights in 2018. This plane uses a rocket to reach suborbital heights, and may run commercial flights sometime in the next few years. It will launch from the Virgin Galactic spaceport in New Mexico.

Progress on this project was halted earlier this year as a result of the COVID-19 pandemic. As restrictions started loosening in the summer, Virgin Galactic stock started to go up.

When a second wave of COVID-19 hit the US in the fall, Virgin Galactic stock dipped. However, the stock saw a nice bump over Thanksgiving weekend. This is because data indicates that case numbers are dropping in New Mexico, and business could start up again soon.

Stable Road Acquisition Corp. runs Stable Road Capital, an investment firm based in California. They caught the attention of Wall Street investors earlier this year, when they announced an upcoming merger with Momentus. Their stock ticker will change to MNTS when this merger happens.

Momentus partners with some of the world’s leading space companies, such as Lockheed Martin and SpaceX. They also work with NASA and other government agencies.

One of Momentus’s most exciting operations is their space delivery service. They work with public and private sector companies to deliver satellites and important cargo into orbit. Unlike many other space services, their spacecraft are reusable.

When this new merger becomes public, the company will have a value of over $1.2 billion. Stable Road stock jumped up after they announced the merger, but it’s still very affordable, making right now a great time to buy.

You may know Boeing as an aircraft manufacturer, their space related projects are also noteworthy. They are one half of the United Launch Alliance, which is working on exciting projects like the Vulcan Rocket.

Boeing is a very established company. They were founded in 1916 and have had a consistent presence in the air and space sector since then. Their aerospace operations are run out of their defense, space, and security division.

Boeing provides a number of different spacecraft, including launch systems, space planes, satellites, probes, and more. They work with NASA and other agencies on their space projects.

Because Boeing is heavily involved in the air travel industry, they have struggled this year. Air travel has been limited, and their stock price has gone down as a result.

However, this market could be the right time to buy Boeing stock. As an established company, it’s unlikely that their stock will ever completely crash. In fact, it’s likely to go up in value as air travel returns to normal.

Investors should be cautious when investing in Boeing right now. Their earnings have plummeted this year, and they’ve also had to lay off thousands of workers. However, it’s likely that this stock will eventually return to normal in the long run. 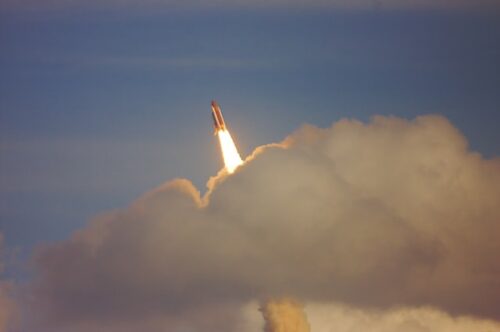 Lockheed Martin is another highly established space company. They are the other half of the United Launch Alliance with Boeing.

Lockheed is currently working on a number of exciting projects with NASA, many of which support their deep space exploration projects. They manufactured part of the Orion spacecraft, a rocket that could send humans to the moon and potentially even further.

Like many other space companies, Lockheed Martin is also involved in defense and security contracts. Their defense contracts have ensured that the company is financially stable. In mid-2020, they reported a backlog of orders valued at over $150 billion. The company’s financial stability makes them an attractive investment.

Maxar is a growing space company based in Colorado. They are involved in satellite communications, radar technology, and more.

This company was created as a merger of four different companies just a few years ago. Although they’re relatively new in the industry, they’ve already been quite successful. Earlier this year, they acquired Vricon, a company involved in 3D satellite data.

This company currently manufactures satellites, and provides access to satellite imagery and data for their clients. They also provide analytics services that can help clients in a wide range of industries.

Maxar performed well in the third quarter of 2020, reporting strong earnings. However, they are still carrying debt for the year, so investors may want to keep an eye on their finances moving forward.

Maxar stock is very affordable at the moment, so now might be the right time to buy. Their services are applicable to both public and private companies, and can be applied to exploration projects as well as defense and intelligence services.

The space business has really piqued investor interest in recent years. As we struggle with climate change here on Earth, many tech companies are looking to space for new solutions.

One key thing to look for when shopping for space stocks is diversity in their operations. While space tourism is a buzzy topic right now, it could be many years before it becomes a reality. Cargo operations and deep space exploration can balance out space tourism.

Successful government contracts may be a good indication of success for a space company. When looking at a space stock, consider their financial data from the last year or so. Consider their revenue and profits relative to expectations.

You should also look at their upcoming projects to see what their future prospects are. Finally, you might look at relevant stock data like their price to earnings ratio. This can tell you if their stock is under or overvalued. 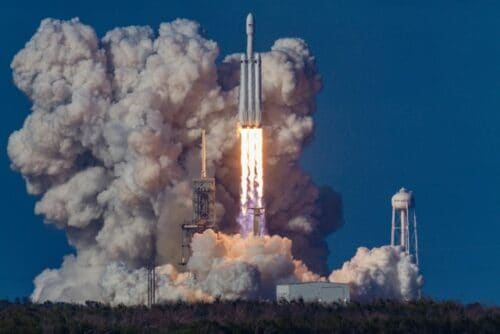 Is Space X A Public Company?

SpaceX is one of the most exciting companies in the space business, and are leading the ‘new space’ industry. Celebrity entrepreneur Elon Musk founded SpaceX in 2002 in southern California. They focus on making space travel more efficient and accessible.

While investor interest in SpaceX is high, they are currently a private company and are not traded on the stock market. Musk has opted to keep SpaceX private because it allows them to focus on innovation without as many restrictions as public companies.

SpaceX has an estimated value of $52 billion. They are known for the Falcon rocket, which is the first reusable rocket to reach orbit.

They are also developing the Dragon rocket, which will be able to take passengers and cargo to and from space. The Dragon is the first private rocket to take passengers to the International Space Station. It could be used for space tourism in the future as well.

Although you can’t invest in SpaceX yet, you can benefit financially from their success by investing in companies that partner with SpaceX. They are proving that commercial companies can be just as successful in the space market as public contractors.

Does NASA Have Stock?

When you think of space, you probably think of NASA. This US agency runs high profile rocket launches, operates space telescopes, and is currently working to send humans to Mars and beyond.

Because NASA is a government agency, they are not listed on the stock market. However, there are still ways to invest in NASA projects. Investors can look for companies that contract with NASA, such as Boeing, Aerojet Rocketdyne, and more.

Landing a NASA contract can be very lucrative for these companies. Space stocks that have contracted with NASA often seen a bump in their stock price as a result.

The aerospace industry is very exciting right now. New innovations are making it easier for companies to send cargo and even humans to space. Commercial space tourism, once considered a thing of the future, is now becoming more realistic.

If you are looking for a broker to buy some of the space stocks we mentioned above check out Webull. Not only can you buy all of the stocks above but you also get free stocks just for signing up and depositing.

Investing in space stocks is the easiest way for investors to capitalize on this innovation. These companies are likely to continue their growth in the future and present an exciting financial opportunity.