Zendesk Competitors and Alternatives: Who Stacks Up Against this Customer Service Software Company? 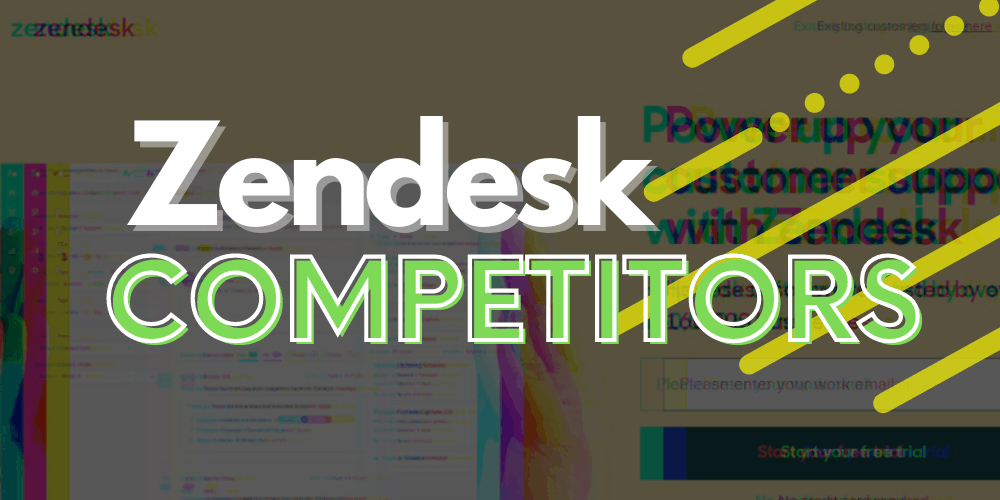 Zendesk is an American tech startup that offers customer service software for businesses of all sizes.

The company was founded by Mikkel Svane, Morten Primdhal, and Alexander Aghassipour in 2007.

Zendesk began in a loft in Copenhagen, Denmark but moved to San Francisco, California in 2009.

Zendesk is available in 150 countries around the world. Zendesk is listed on the New York Stock Exchange under the ZEN ticker.

It is included in the stock market index the Russell 1000 Index component.

In 2015 the company acquired We Are Cloud SAS for $45 million for their BIME Analytics software which now helps to power the Zendesk platform.

Lets take a look at some of the biggest Zendesk competitors!

Zendesk is considered the most complete and functional platform of its kind.

The number of features available makes it an excellent choice for large businesses that will have use of them.

Zendesk might be less attractive to smaller teams who do not need all the features or simply do not have the funds to pay for it.

There are different pricing tiers for Zendesk, which operates on a Software-as-a-Service. Its cheapest tier starts at $39 a month for each agent.

For smaller businesses, this might be too expensive and that’s where Zendesk’s competitors can draw in their customers.

Certain features may be locked behind a higher price wall but one of Zendesk’s smaller, more focused, competitors may offer it at a cheaper price.

Now let’s take a look at Zendesk’s competitors and alternatives and what features they offer:

SharePoint from Microsoft is Zendesk’s main competitor that was launched in 2001 by Microsoft.

Originally the program was sold to businesses as document management software.

The program has expanded in scope thanks to its highly configurable nature; it can cover a variety of business needs.

Microsoft revealed the numbers for SharePoint with over 200,000 using the software and 190 million users.

The program is available in most languages thanks to Microsoft’s commitment to availability.

Microsoft is one of the largest corporations in the world and has a market cap value of over 1 trillion dollars.

The company is publicly traded on Nasdaq under the ticker symbol MSFT.

In 2020 the company had reported $143 billion in total revenue with $53 billion operating income.

SharePoint is just one product in Microsoft’s suite of office tools.

The software is easily integrated with a vast range of Microsoft tools like Teams, Outlook, and Word.

Help Scout is a software-as-a-service company that provides help desk software for businesses of all sizes.

The company was founded in 2011 by Nick Francis, Denny Swindle, and Jared McDaniel.

Help Scout has over 10,000 customers from over 140 countries including popular online businesses Trello, Buffer, and Reddit.

The company has its headquarters in Boston, Massachusetts. Its flagship product is Help Scout which is web-based and it is fully HIPAA compliant.

The company is privately held, owned by its founders. Help Scout has 100 employees which are employed on a remote basis from 80 different countries.

As of 2020, the company is operated as a fully remote workforce.

Help Scout’s main product is its help desk software which enables the team to provide customer support through their tools.

The company also has a Docs feature which helps businesses to create a knowledge base for their customers.

Intercom is an American software company that’s based in San Francisco, California. The company was founded in 2011 by four software designers.

Using the money raised from the sale the four designed and built Intercom which is a messaging platform businesses can use to speak with new and existing customers.

The company is privately owned with its founders still holding leading positions at the company.

In 2012 Biz Stone, one of the co-founders of Twitter invested in intercom.

The company has led multiple rounds of funding with its Series D round raising $125 million.

Over 600 people work for Intercom helping to develop the software and provide customer support.

Zendesk has more to offer than all of the competitors mentioned here.

It is a complete package that has everything a business could need for their help desk, customer relations, and much more.

This gives Zendesk a competitive advantage as businesses seek to find a platform that can do everything they need.

The company offers a range of different pricing which can start as low as $15 a month.

This is a limited package and many features are locked behind the higher tiers.

The company does offer a free trial that patrons can use to test their products.

This can give customers the opportunity to try before they commit to Zendesk.

As one of the most comprehensive software-as-a-service platforms out there, Zendesk has become a popular choice for many businesses.

Their products are rated highly particularly their help center, AI-powered automation, and reporting.

Smaller businesses may find that Zendesk is too costly for them and seek out cheaper alternatives.

The competitors to Zendesk are smaller companies that have a more streamlined platform.

This means they can keep their prices down and customers can enjoy the features they need without paying extra for those they won’t use.