Not everyone has heard of Blaze Pizza, but those who have are ready to buy Blaze Pizza Stock on the open market.

While many pizza chains like Papa John’s and Domino’s are fading away, this California-based chain is rapidly climbing in popularity, and for good reason.

This made-to-order pizza restaurant combines many of the best aspects of fast food with customization the customers crave.

Blaze Pizza allows customers to build their own pizza and receive it with an average cook time of just three minutes.

The growing popularity of this chain has savvy investors asking, “Can you buy Blaze Pizza stock?”

Follow along for more information as we answer this question and more. 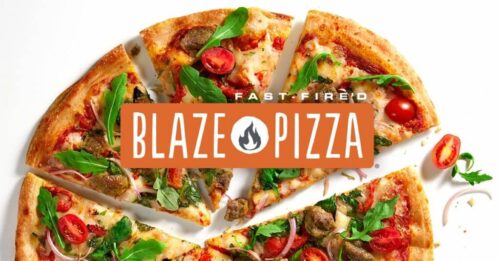 What Is Blaze Pizza?

Blaze Pizza was founded by the couple Elise and Rick Wetzel, who formerly made Wetzel’s Pretzels.

The couple decided to model a pizza restaurant on the Chipotle style of “made-to-order” burrito bowls and tacos.

They identified this gap in the current pizza restaurant market and planned to cater to this entirely untapped customer base.

The first restaurant took off in August 2012 in Irvine, California, focusing on providing pizzas that could be created in three minutes or less.

The Wetzels designed their initial spread of available ingredients based on what they knew they could make quickly and tastily.

A second flagship location opened in Pasadena in October 2012.

People loved the idea of made-to-order pizza that also tasted fantastic instead of haphazardly slapped together.

In just the first year of operation, the Blaze Pizza Irvine restaurant grossed over $1.8 million, and the Pasadena restaurant made $2.5 million.

By the end of 2014, Blaze Pizza opened 50 different units, marking it as one of the fastest expanding companies in the US.

In 2015, Blaze Pizza announced its intention to open locations outside the US, specifically in Canada.

It quickly followed through on this promise, opening a Toronto Blaze Pizza franchise in October 2015, then another restaurant in Calgary in February 2016.

Since then, Blaze Pizza has expanded to British Columbia, Kuwait, and the Saudi Arabia capital city Riyadh.

By September 2019, Blaze Pizza even had a pizza restaurant inside the United Arab Emirates.

All of this has preceded an IPO, although the company has announced its intention to make a public offering sometime in the near future.

This new development is exciting news for investors looking to buy stocks in the company.

Blaze Pizza is owned by its cofounders and multiple prominent spokespeople, such as Lebron James.

In fact, Lebron James owns and operates a handful of franchised Blaze Pizza restaurants, so he owns a significant amount of the current private stock. 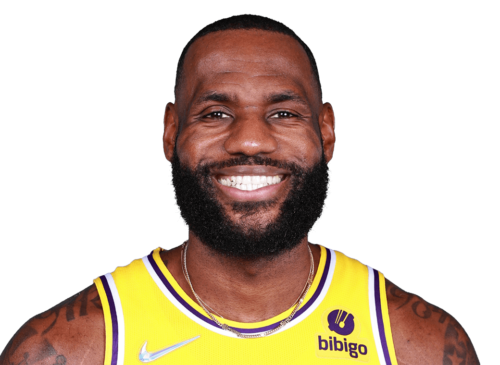 How Much Is Blaze Pizza Worth?

As a private company, Blaze Pizza’s worth is kept quite private.

Based on historical investments and growth, Blaze Pizza is currently estimated to be worth nearly $1 billion.

What Is Blaze Pizza’s Revenue?

Why Is Blaze Pizza Successful?

At its core, Blaze Pizza is successful because it combines two major concepts: fast food and personalized pizza.

Most pizza franchises in the US only allow you to choose from a small range of predesigned pizza options.

While you can remove toppings here and there, you’re broadly restricted to certain pizza archetypes or flavors.

And this is what makes Blaze Pizza stand out.

Customers can approach the counter at any franchised store and speak to the chefs before they put their pie in the oven. 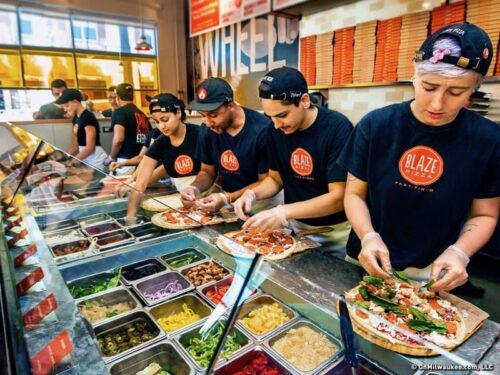 They can determine which toppings or sauces they want, which kind of dough is used, and so on.

There is also a selection of alcohol and wine available which further sets it apart from competitors like Pizza Hut.

All of this strikes a chord with modern foodies, who increasingly want food made to order instead of having to choose from a premade list.

But Blaze Pizza is also successful just because its pies taste good!

Blaze Pizza’s menu includes a lot of customer favorites and specialty options, such as gluten-free dough.

Customers can complete their meals with signature salads, craft beer, wine, fresh lemonades, and more… all available at lightning-fast speed.

Each oven is a high-temperature gas-fired pizza model, and the ovens are the only pieces of cooking equipment at each restaurant.

The oven is also used for cooking Italian sausage, meatballs, chicken, and even some desserts.

Simply put, Blaze Pizza outshines other pizza companies in the US because it creates tasty food in the exact way people want to eat it.

Can You Buy Blaze Pizza Stock?

Unfortunately, you cannot buy Blaze Pizza Stock at the moment.

Though Blaze Pizza is rapidly becoming one of the most popular pizza chains in the country, it has not yet undergone an Initial Public Offering (IPO), so you can’t buy individual stock units.

However, you can invest in Blaze Pizza stock through one method: franchising.

Through franchising, you pay a franchising fee and agree to open a Blaze Pizza store in your local area.

Doing so requires a significant amount of seed capital.

For example, just one Blaze Pizza franchise store could cost you between $454,000 and $1,150,500, depending on the location and the supplies you need to purchase.

What Is Blaze Pizza’s IPO Date?

Blaze Pizza is expected to announce its IPO date in 2022.

The owners have stated they want to reach 500 stores first, and that they’re on track to meet the goal this year.

Investors expect exciting IPO news on Blaze Pizza by the third quarter of 2022 or earlier.

What Is the Blaze Pizza Stock Symbol?

At the moment, Blaze Pizza doesn’t have a stock symbol because it is not listed on the NASDAQ or another stock exchange.

Once it files for the IPO, investors will be able to see what stock symbol the company is applying for.

Fans hope for something memorable and meaningful, such as BLAZ.

What Is Blaze Pizza’s Stock Price?

Blaze Pizza’s stock price will depend upon how many public stock shares are offered and what the company’s value is at the time of offering.

An excellent way to estimate this is to look at some of the company’s prime competitors.

This is a better option for investors who want to invest but don’t want to break the bank by opening up a franchise location.

All data available points to Blaze Pizza stock being an excellent investment item to add to your portfolio, but only time will tell.

If you do franchise with Blaze Pizza, you’ll automatically become a stockholder in this growing company.

Once the company has an initial public offering, you’ll be granted a certain number of stock shares based on your level of investment.

After that point, you can do with the stocks whatever you please, including holding on to them or selling them to other investors.

That being said, not everyone will want to franchise with Blaze Pizza.

Doing so requires taking on a business managerial role, as you’ll need to control the finances of your franchise store and possibly manage the location yourself.

Initial franchise fees are usually around $30,000 per restaurant, and it will easily cost you over $100,000 to pay for fixtures and furniture. 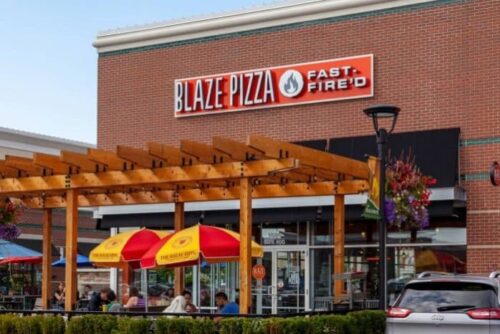 Additionally, some of the money you make has to be sent to Blaze Pizza because of the franchising business model.

There’s currently a 5% to 6% royalty fee for all gross sales and another 2% creative fee for gross sales.

Still, investors who believe in Blaze Pizza do have a way to invest right now… even if it comes with certain strings attached.

While you can’t buy Blaze Pizza stock quite yet, there are several alternatives you can invest in if you want to jump into the pizza industry or are just looking for a relatively stable place to stash your money.

After all, everyone loves pizza, and it’s unlikely that the pizza industry will suffer a downturn soon.

To start your search, we’ve included a list of Blaze Pizza competitors.

There’s no better place to look for alternative shares than perhaps Blaze Pizza’s biggest competitor and the titan of the fast-food pizza market, Domino’s Pizza.

Many pizza enthusiasts gravitate toward this company for its easy-to-use website that allows them to effortlessly place an order through an internet browser.

However, Domino’s Pizza stock isn’t cheap, and it doesn’t have the best annual dividend yield, clocking in at just over 1%.

Still, this could be a great long-term growth investment, as sales for Domino’s have remained essentially the same for all of its US franchises for many years.

So you can invest in this pizza company and simply ride the gradual increase in the stock market at large.

Basically, this stock option may be a better choice if you have some extra cash and don’t mind the abnormally high price tag.

Papa John’s is another big competitor for Blaze Pizza, as it’s primarily known for getting pizza on the table faster than almost any other company in this industry.

Even 2020 was a good year for Papa John’s: the CEO Rob Lynch indicated that sales at the company’s stores increased by 27% between March and April.

Though this growth may have been driven by more people staying at home due to the pandemic, it’s still a solid indicator of stability and good investment results for the future.

Yum! is the parent company of Pizza Hut, although it also owns the fast-food chains Taco Bell and KFC.

As a result, this could be a better pick if you want to invest in fast food in general rather than narrow your investment focus to pizza alone.

Forward annual dividend yields are above 2% most of the time, possibly making this a better choice for those looking for quarter-based profits rather than long-term growth. 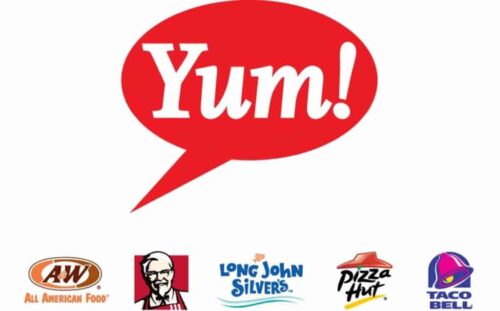 Should You Wait for a Blaze Pizza IPO?

Whether you choose to hold on to your investment cash until the Blaze Pizza IPO is your own personal choice.

Since there is currently no set date for the IPO, it may be a better return on your investment to put at least some of your money to work while waiting.

Blaze Pizza’s journey is just beginning, and it already runs over 300 franchises in the US and over a dozen in other countries.

Furthermore, an IPO is expected this year.

Once Blaze Pizza goes public, it might be a good idea to check the stock price and consider picking up a few shares for your investment portfolio!

Looking for a TLDR on Blaze Pizza Stock?

Here are the most common questions we get from investors and traders.

Does Blaze Pizza Have a Stock?

Blaze Pizza does not yet have a public stock ticker.

It is expected to announce plans for an IPO sometime this year.

The company’s owners have publicly stated their intentions to take the company public.

The plan is to wait until the company has at least 500 stores.

The IPO date announcement is expected to be around the third quarter of 2022.

Some owners were the original founders, while others are famous names who have invested in the company.

Basketball legend LeBron James is one well-known majority stakeholder in the company.

Which Pizza Companies Are Publicly Traded?

Dominos and Papa Johns have individual stock tickers, and Pizza Hut is part of Yum Brands.