DoorDash Competitors and Alternatives: Who Stacks up Against this Food Delivery Service? 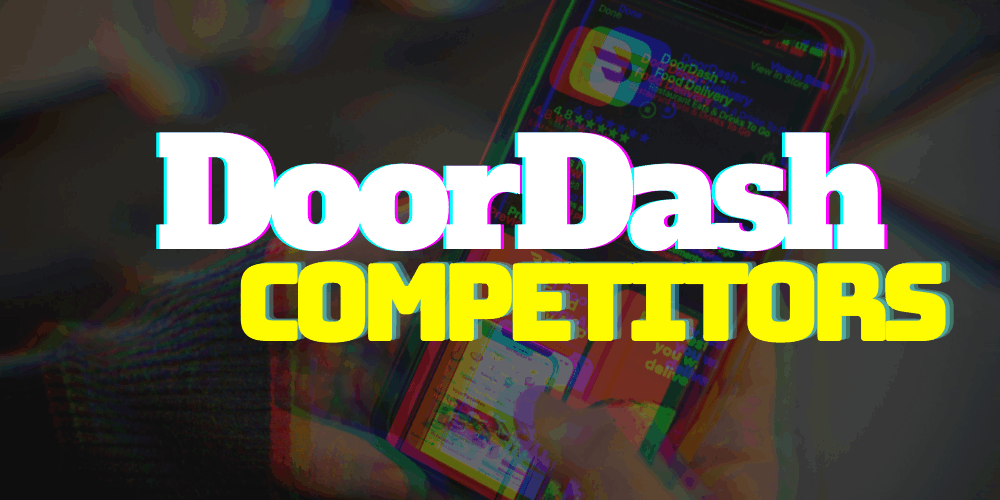 DoorDash is an online platform that provides a food delivery app for customers in the United States, Canada, and Australia.

The company was founded by a group of students at Stanford University in 2012.

By 2013 the company was able to raise seed money from Y Combinator for a 7% stake of the business.

The current CEO is founder Tony Xu, with Stanley Tang and Andy Fang as directors for the business.

The company is publicly traded on the New York Stock Exchange under the DASH ticker.

Almost 4,000 people are working for DoorDash, with most of its employees being self-employed delivery drivers.

The company has experienced accelerated growth since its inception and overtook competitor Uber Eats as the second-largest food delivery service in 2018.

The company had its initial public offering on December 9th, 2020, where it was able to raise $3.37 billion.

The company continued to grow and soon surpassed Grubhub to become the leading food delivery service in the states in 2020.

Although the business has a negative net income, it is the industry leader. The company derives most of its revenue through its main delivery service.

It charges delivery fees, subscription fees, and takes a commission of sales that are done through its app.

The company also allows businesses the opportunity to advertise through their app which brings in a new revenue stream.

DoorDash has expanded to open its own ghost kitchen in Redwood City, California. It is here that they offer food that is exclusively available on the app.

They also expanded and opened their own physical restaurant in November 2020.

DoorDash may be the market leader, but here are some DoorDash competitors and alternatives:

Uber launched a new service in 2014 to compete with GrubHub and DoorDash for a share of the food delivery market.

They called it Uber Eats and used their already created technology from Uber and existing driver network to expand rapidly.

Thanks to Uber’s success around the world with their taxi-hailing company, they have introduced Uber Eats to 45 countries.

GrubHub and Postmates are limited to just the United States, while DoorDash has expanded only to Canada and Australia.

Uber Eats has fallen behind its competitors in America but maintains a steady lead when considering its worldwide operations.

Uber is listed on the New York Stock Exchange under the ticker symbol UBER.

This downturn in income is due to the Covid-19 Pandemic which reduced the need for public transport.

GrubHub is the oldest DoorDash competitor. The business began in Chicago, Illinois in 2004 and has grown to operate in 3,200 cities across all 50 states.

The company started as an alternative to paper menus by Mike Evans and Matt Maloney.

They were able to raise funding in 2007 to expand the business into San Francisco and New York.

Since then, the company has led multiple rounds of funding and continued to expand across the country.

In 2020 GrubHub was acquired by European delivery service Just Eat for $7.3 billion.

GrubHub is traded publicly on the New York Stock Exchange under its ticker symbol GRUB.

Over 2,700 people are working for GrubHub in various cities across America.

As a way to increase their revenue, the company introduced a subscription model in 2020 to offer free delivery from selected restaurants.

Postmates was founded in 2011 by Sam Street, Sean Plaice, and Bastian Lehmann.

The company has its headquarters in San Francisco, California.

By 2014 the company celebrated its one-millionth delivery. Postmates focuses on the United States market and has operations in over 550 cities across America.

By 2019, the total valuation of the company was $1.85 billion thanks to several rounds of funding.

In 2020, the company was acquired by Uber for $2.65 billion. The company directly competes with its sister company, Uber Eats, as well as DoorDash and GrubHub.

There are 5,341 employees working for Postmates. The company has been working on an autonomous delivery rover called Serve.

What Is DoorDash’s Advantage?

One of the advantages that DoorDash has is a comprehensive rating system for its drivers.

This gives customers the ability to fairly rate their delivery experience and holds drivers accountable.

Comparatively, Uber Eats has a thumbs up or down system that doesn’t offer much depth, and GrubHub doesn’t have any way

to rate the service.

The reason this works in DoorDash’s favor is that drivers are incentivized to offer a higher experience.

It’s a customer-focused part of its operation that has helped the company capture the leading position.

The food delivery market is still in its infancy. Many of the companies in this arena, including DoorDash, are focused on expansion and currently operate at a loss.

DoorDash has proven to be an attractive investment for venture capitalists and retail investors alike.

In only 8 years the company has become the market leader in the United States.

Ordering food online is becoming highly popular and DoorDash will remain at the front of this expanding industry.

Thanks to careful acquisitions, the company has a vested interest in self-driving technology which may reduce its outgoings in the future.

DoorDash is a high-growth company that is showing no signs of slowing down.