Best Buy is a popular electronics retailer that operates in North and South America.

The company was founded in 1966 by James Wheeler and Richard M. Schulze.

Originally, the company traded under the name Sound of Music but was rebranded in 1983.

The re-brand was due to the business’ focus on a wider range of goods.

The company has its headquarters in Richfield, Minnesota.

Best Buy has a number of subsidiaries, including insurance and repair company Geek Squad, Pacific Sales, and Magnolia Audio Video. 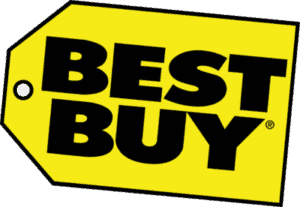 The company has grown to become the largest retailer for consumer electronics in the United States.

Best Buy is listed on the New York Stock Exchange under its ticker symbol BBY. It is included in the stock market index the S and P 500 component.

During the fiscal year 2019, the company reported revenue of $42.88 billion and had an operating income of $1.90 billion.

There are over 950 stores across America, Canada, and Mexico.

The way Best Buy makes its money is through the sale of goods and services.

A significant bulk of its income is driven by the sale of computing and mobile goods which account for 44% of revenue.

The sale of merchandise across all categories makes up 93% of Best Buy’s total revenues.

Services provided by Best Buy total around 5% of revenue for the company.

Although they account for a much smaller share of the revenue, the services that Best Buy offers are a core part of the total experience.

Undoubtedly their merchandise sales are bolstered by the services that Best Buy can offer its customers.

Now, let’s take a look into some Best Buy competitors and alternatives:

Walmart is the largest company in the world in terms of total revenue.

It is a supermarket chain that operates in the United States and Canada as Walmart.

The company is also active worldwide under different names such as Asda, in the United Kingdom. There are 11,443 stores throughout the world and the company sells a large range of products.

Walmart has an emphasis on being a one-stop-shop and is a popular destination for groceries.

They offer a range of electronic goods which puts it in competition with Best Buy.

Best Buy is highly specialized in selling consumer electronics and has a much wider selection than Walmart.

Walmart remains hot competition thanks to the high foot traffic it experiences and its more diverse selection of goods.

They are a publicly traded company. Walmart is listed on the New York Stock Exchange under its ticker symbol WMT.

There are over 2 million people working for the company worldwide. In 2021 Walmart had reported revenue of $556.2billion and an operating income of $22.55 million.

Amazon is one of the most valuable brands in the world with a market capitalization of over $1.5 trillion, behind Apple.

The company started with Jeff Bezos in 1994 as an online book retailer.

Since then the company has innovated and expanded to offer a wide range of products and web services.

There are around 1.3 million people working for the company around the world with over 810,000 in the United States.

One of its most popular product types is consumer electronics which makes it a strong competitor for Best Buy.

Amazon is the third biggest consumer electronics seller in the United States.

It sits behind Best Buy and Walmart in this category, but its share in the industry is increasing.

Its retail products are Amazon’s most significant source of revenue.

Apple is the largest technology company in the world.

They have a market capitalization of over 2 trillion making them the most valuable company in the world.

Apple designs and manufactures a highly popular range of goods.

Its smartphone, the iPhone, is one of the most popular smartphones in the world.

The iMac, iPad, and Airpods are among its product range that are highly sought after.

The company introduces new products to market each year and people queue up to be the first to get them.

Apple supplies Best Buy and other retailers with their goods but in 2001 the company launched its own Apple Stores.

This put it in direct competition with Best Buy and they have become the fourth largest retailer for consumer electronics.

The company also uses its stores as a base to have local experts for repairs.

Apple is listed on Nasdaq under the ticker symbol AAPL.

What is Best Buy’s Advantage?

Best Buy’s competitive advantage is that it is a specialized retailer and can offer more focused services.

For example, Best Buy can sell electronics, upsell accessories, and suggest services such as Geek Squad.

When compared to Walmart and Amazon, the company has a better reputation for being knowledgeable and trustworthy when it comes to electronic goods.

The company offers a much wider range of goods than its competitors and benefits from the human element.

There is strong competition in the consumer electronics market but Best Buy has established itself as industry leaders.

The industry is growing and will continue to grow for a long time.

Best Buy has a strong online presence as well as many retail outlets across the country.

Its diverse range of goods, helpful staff, and good reputation will continue to play in Best Buy’s favor.